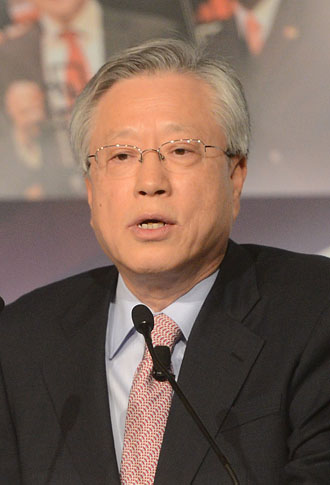 The Seoul Central District Prosecutors Office yesterday morning raided the headquarters of mobile carrier KT, some subsidiaries and even the residence of company Chairman Lee Suk-chae to investigate breach of trust accusations. Lee has been summoned to answer questions soon and banned from leaving the country.

The prosecutors’ office dispatched dozens of investigators to five KT buildings, five business partners and six residences of company executives, obtaining hard disks, account books and internal documents. The raid into the second-leading mobile service provider comes after two criminal complaints against Lee by the People’s Solidarity for Participatory Democracy, a civic group, in the past eight months. In February, the group requested the prosecution investigate Lee for causing his company to lose tens of billions of won after he pushed ahead with a handful of businesses that failed.

Earlier this month, the group joined forces with the National Union of Media Workers, which represents journalists, to ask the prosecution to investigate Lee for approving the sale of 39 buildings owned by the telecom giant at 75 percent of their estimated value between 2010 and 2012. The alleged loss to the company amounted to 87 billion won ($82 million), according to the civic group and union’s estimates.

“We are aware that the raids follow the People’s Solidarity for Participatory Democracy’s request for an investigation,” said KT in a simple statement. “We have been doing business based on normal management decisions and have sincerely responded to the prosecution’s investigation.”

KT, formerly known as Korea Telecom, was once the nation’s telecommunications monopoly and a public company. But it was privatized in 2002. Although the government doesn’t own a single share in the company, KT has a bitter history of having its CEO replaced at the start of new administrations, also known as the “public company CEO jinx.” The government tends to consider formerly public companies as their trophies or possessions. Lee’s predecessor, Nam Joong-soo, was forced to step down after a prosecution probe in 2008. Many speculated that Nam was punished because he was close with former President Roh Moo-hyun. The situation is similar at Posco, which went private in 2000.

The National Tax Service earlier last month conducted a “special” investigation of the top steelmaker, and the probe is seen as a way of forcing out Chairman Chung Joon-yang, political insiders say. Chung’s term ends in early 2015. 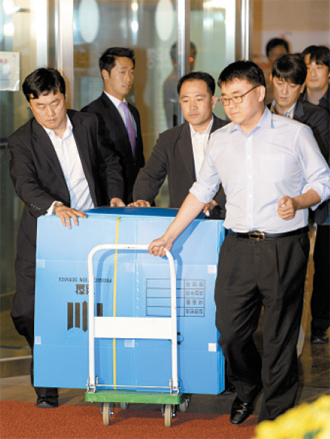 Prosecution investigators haul boxes of documents out of KT headquarters yesterday in Seocho-dong, southern Seoul, after they raided its offices. [NEWS1]

Lee Suk-chae became KT chairman in 2009, a year after former President Lee Myung-bak was inaugurated, and had his three-year term extended last year.

However, rumors that the Park administration wants him to resign have been persistent.

Last month, some media reported that the Blue House made its wish clear behind the scenes, but Lee insisted on staying.

“A lot of employees want Chairman Lee to voluntarily quit,” said a KT worker who is familiar with the internal corporate affairs days before the raid. “But Lee has been too stubborn. He appears to want to complete his three-year term.”

The Science, ICT and Future Planning Committee at the National Assembly have asked Lee to attend a hearing during the parliamentary audit scheduled for Oct. 31, but before the raid Lee said he won’t be able to make it because he is traveling to Rwanda from Oct. 25 through Nov. 2.