FC Seoul to take on ‘Man City of Asia’

FC Seoul to take on ‘Man City of Asia’ 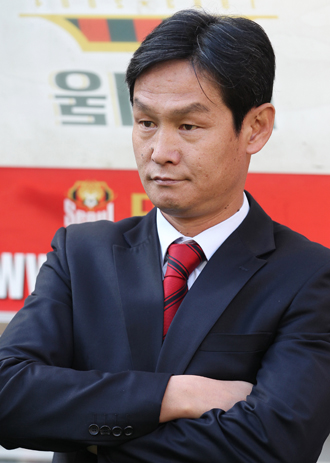 FC Seoul coach Choi Yong-soo says his team needs to use counterattack situations with its speedy wingers against Guangzhou Evergrande on Saturday. By Kim Min-gyu

The final matches of the Asian Champions League between Seoul FC and China’s Guangzhou Evergrande, which resemble a contest between David and Goliath, kick off on Saturday in Seoul. The finals will have two legs, and the second game will be held on Nov. 9 in Guangzhou.

The Chinese club is nicknamed the “Manchester City of Asia.” Its total operation cost, including salaries for players and coaches, is 120 billion won ($113 million) per year. The annual salary for the club’s head coach, Marcello Lippi, 55, who led Italy to win the 2006 Germany World Cup, is 16 billion won ($15 million). By comparison, the annual salary of FC Bayern Munchen coach Josep Guardiola, 42, is 24 billion won.

According to Evergrande, the club has offered a 2 billion won bonus to the team each time it wins an AFC match this year - it has already won six - and the bonus will skyrocket if the club becomes the Asia champ.

“They certainly are above Asian level, not only in football but also in club management,” SBS ESPN cable channel football analyst Jang Ji-hyun said. “In the history of Asian football, there has been no such team like Evergrande that is financially strong. That team is even stronger than the Chinese national team, for sure.”

On Evergrande’s roster, there are 14 Chinese players such as Zheng Zhi, who once played for Charlton Athletics FC of the U.K., who are on the national team, but less than half of them are among Lippi’s best 11. Three foreign players, forward Dario Conca, 30, of Argentina; forward Elkeson, 24, of Brazil; and midfielder Muriqui, 27, of Brazil, lead the team’s offense. The club spent $21 million in transfer money to land the trio. Elkeson scored 26 goals in 31 games this season, and Muriqui scored 22 goals this season. Evergrande overpowered Japan’s Kashiwa Reysol in their semifinals on the aggregate score of 8-1. The Japanese club beat FC Seoul’s biggest rival, the Suwon Bluewings, 6-2, in a Group H preliminary match.

The head coach of “David” - FC Seoul - is Choi Yong-soo, whose annual salary is 60 times less than Lippi’s. His strategy is quite simple. “We shouldn’t allow goals at home,” Choi said. “A 1-1 draw is worse than 0-0, but it doesn’t mean that we will just focus on defense.” Choi said the team needs to use counterattack situations with their speedy wingers, such as Ko Yo-han. He said center midfielder Ha Dae-sung, the team’s captain, should pressure the opponents’ midfielders. “I expect forward Dejan to score in the game as he is in a good mood recently,” Choi said. Dejan scored a goal against England in the 2014 World Cup Group H preliminary match.

“Everyone talks about the three foreign forwards, but I suggest coach Choi be careful about the Chinese players on Evergrande,” said former Guangzhou head coach Lee Jang-soo, a football analyst. “Midfielders consisting of Chinese players are the key of Evergrande’s offense because they make scoring chances.”

In 2010, Lee became the head coach of Evergrande when it was in the minor league division, equivalent to the K-League Challenge, and put the team into the Chinese Super League in 2011 by winning the minor league championship. Evergrande then became the champion of the 2011 season under Lee’s leadership, but the team’s ownership, which wanted to promote the team to a world-class club, fired Lee in the middle of 2012 season, even though they were on the top of the league. Most of the current best 11 players were developed by Lee.

“When the team first played in the Super League, the basic strategy for Evergrande was to make effective counterattacks based on a strong defense,” Lee said. “But after they began dominating the league, they became a very offensive team. An offensive team like Evergrande often allows goals by opponents’ counterattacks as defenders move forward to the opponents’ area to support their attackers. Coach Choi needs to use such situations effectively in the match.”