Israel gives Korea tips on how to handle far-flung diaspora

Israel gives Korea tips on how to handle far-flung diaspora 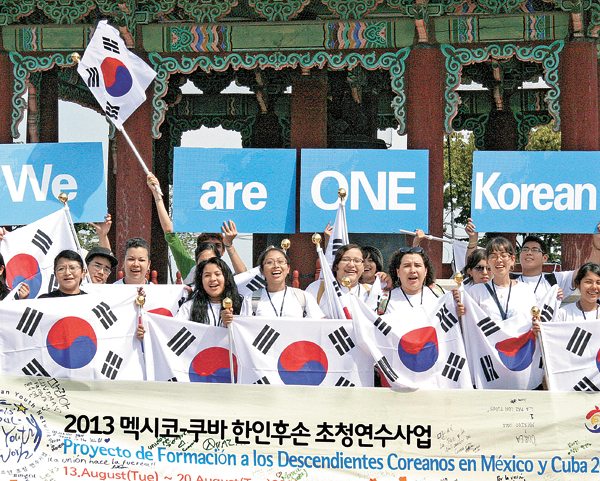 The Korean diaspora, which began 150 years ago when the first Korean migrants settled in Russia, has spread to 175 countries around the world and now numbers some 7.26 million people.

The Jewish people are another widespread diaspora, with some 7.3 million Jews living around the world compared with 6.05 million living in Israel in 2013. As a result, Israel is considered to have one of the most important overseas residents policies.

Through the years, Israel has assigned diaspora issues to a specific ministry, and they are now handled by the ministry that also takes care of policies about Jerusalem.

The JoongAng Ilbo recently conducted a written interview with Israeli Minister of Jerusalem and Diaspora Affairs Naftali Bennett, 41, on the country’s diaspora policies.

“It is important to understand that the modern state of Israel was born from the diaspora, unlike Korea’s case, in which the Korean diaspora came from the Korean Peninsula,” Bennett told the paper.

When World War II ended in 1945, a third of the Jewish population had been murdered by the Nazis and of 18 million Jews worldwide, only 12 million survived.

“In May 1948, the British mandate in the Land of Israel was coming to its end, and based on the 1947 UN resolution, Israel had declared independence,” he said.

“The only chance for the young Jewish state to survive in the hostile Middle East, surrounded by enemies in undeveloped lands, was to absorb a large number of Jewish immigrants,” said Bennett. “For the first time in 2,000 years, the Jews had a place to come to, freely, with no immigration limits.”

Unlike the Korean population, which gradually expanded to reside in 175 countries, Bennett said that “throughout the ’60s and ’70s, Israel kept absorbing millions of Jews from about 100 countries, while fighting wars and building up a modern country and society.”

The l argest waves in recent years came after the collapse of the Soviet Union and the Eastern bloc in 1989.

Israel had a population of more than 8 million in 2013, with 75 percent Jews, 21 percent Arabs and 4 percent others, including about 100 South Koreans and three North Koreans, defectors who became residents. In 2010, Israel surpassed the United States as the country that has the largest Jewish population in the world.

“The diaspora plays a big, crucial role in the fate of Israel,” said Bennett, emphasizing relations with the United States. “No other nation has most of its members spread outside the homeland, hence forming this unique ministry.”

He said, “We expect that by the end of this decade, most of the Jews in the world will live in Israel” for the first time in 2,000 years.

“The main problem in defining the diaspora is defining who is a Jew,” Bennett said. “There were naturally many mixed marriages over the years, and in many countries there is insufficient evidence that can prove a person’s identity. This may cause problems.”

He pointed to the example of how, over the years, more than 200,000 Ethiopians were absorbed in Israel. Israel began to absorb Ethiopian Jews in 1983.

“The first wave was relatively easy, as they lived as Jews and had a long, proven tradition.”

But over the years, “another tens of thousands of Ethiopians claimed that although they acted like Christians, their ancestors were Jews who were forced to convert” or claimed to have relatives in Israel.

“So, they were brought, too, with great costs to absorb them, give them apartments, education, health care and everything else that a modern country gives to its citizens,” Bennett said.

Bennett also offered words of advice as to what the Korean government can do in order to stay connected to its overseas population.

He said that Israelis who return to Israel after staying six or more years abroad receive tax and other benefits as “return residents,” whereas such policies do not exist in Korea.

He added that in Israel, Israeli citizenship is not revoked when the individual obtains foreign citizenship, and official information for the diaspora is readily available.

The Israeli government in 1999 established the Taglit-Birthright Israel, a program that invites young Jews between the ages of 18 and 26 on an educational trip to Israel. “Some of the participants migrate to Israel as a result and others become good ‘ambassadors’ of the state of Israel,” said Bennett.

His ministry has 35 employees and an annual budget of several millions of dollars.

“But it is important to remember that most of the budget and employees are located in other ministries that also deal with the diaspora,” said Bennett, including the Absorption Ministry, Education Ministry and the Foreign Affairs Ministry, as well as non-government agencies such as the Jewish Agency, which invests billions of dollars in the diaspora.

In Korea, said Bennett, there isn’t a centralized source of official information about immigration or returning to Korea, not even in the embassies abroad.