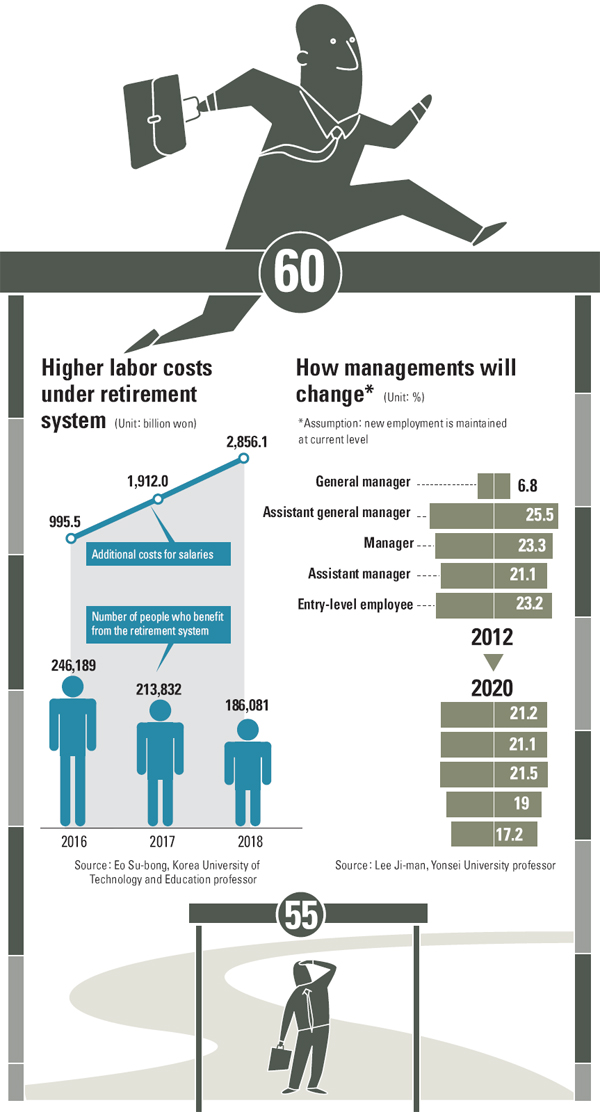 Companies are crying foul over the expenses anticipated by a rise in the retirement age.

Under the new law, however, all Korean companies are required to follow the minimum. And since older workers receive higher salaries than new recruits, manpower costs are expected to jump.

Some economists say that all together, local companies will have to shoulder around 1 trillion won ($942 million) in additional labor costs annually if the law is implemented as planned beginning in 2016. And their labor cost will continue to grow.

One company visited by the JoongAng Ilbo is working on a plan to deal with the new requirement. In its case, the current retirement threshold at the company will be lengthened by four years.

“Even if we assume that we freeze salaries between this year and 2016, the labor costs will rise 100 billion won every year,” said a general manager at the company.

“We feel squeezed because the government has forced this on companies before they could come up with any solutions,” the manager said. “There is little possibility that the labor union will agree to a restructuring of our salary system.”

The company’s union is opposing a salary reduction scheme called a salary peak system, under which an employee who is nearing retirement age accepts salary cuts for his final few years.

Another local company has been implementing a salary peak system under a labor-management agreement from six years ago and has been rehiring workers who retire at the age of 55 and paying them reduced salaries.

But the company’s union is demanding a revision of the agreement in which a current salary will be guaranteed a worker until he hits 60, and then he may be rehired at a lower salary for a few years.

“We embraced an increase in labor costs to introduce the salary peak system, and it has virtually raised our retirement age,” said an official at the company. “But if the retirement extension law is implemented, we can’t even fathom how much more of a burden we will have to shoulder.”

According to Eo Su-bong, an economics professor at the Korea University of Technology and Education, the retirement extension law will saddle local companies’ additional labor costs of at least 995.4 billion won in the first year the law is implemented. In 2018, the additional yearly cost will rise to at least 2.86 trillion won.

Eo presented research on the projected labor cost increases Tuesday at a symposium at the Korean Labor Economic Association, a research agency that he heads.

“Considering the rate of the workers leaving companies voluntarily or on retirement, the number of the workers that will benefit from the retirement extension law will amount to 180,000 to 240,000 every year,” said Eo at the symposium. “If the companies are left to shoulder the increasing burden alone, it will weaken their competitiveness.

“That will also have a negative effect on the country’s youth employment, and as a result, will hit the labor market hard.”

Many local companies say the implementation of the law is too sudden. Japan implemented a law extending its retirement age to 60 in 1994, but 93 percent of Japanese companies were already implementing a 60-year-old retirement system.

According to a survey that the Ministry of Employment and Labor conducted on all Korean companies with 300 employees or more, only 23 percent were observing the 60-year-old retirement system in late 2011. In the rest of the companies, the retirement age was set at 55 to 57 years old.

Korea’s seniority-based employment system is a core problem, experts say. Many local companies employ the seniority-based system, under which workers, regardless of their productivity or the nature of their work, get higher salaries as they age.

As of late 2012, 75.5 percent of local companies were using a seniority-based system.

“If the companies maintain their new recruitment at current levels, the number of their workers will increase by 17 percent in 2015,” said Lee of Yonsei University.