Left: A 1902 photo of the temporary palace within Bukhansanseong Fortress in Goyang. Right: About a century after being buried in a landslide, the stone foundations of the palace have been uncovered. Provided by the Gyeonggi Institute of Cultural Properties

A king of the Joseon Dynasty (1392-1910) lived a rather circumscribed life, spending most of his time ensconced in his palaces in Seoul.

But when he did leave Seoul on an outing, he had more than 10 temporary palaces around the country where he could stay the night.

The temporary palaces in Goyang and Gwangju in Gyeonggi were used in times of war; one in Hwaseong, Gyeonggi, for visiting ancestral tombs; one in Cheorwon, Gangwon, for overseeing military training; and one in Onyang, South Chungcheong, for visiting the hot springs. Sadly, most of those temporary palaces are long gone, destroyed by war, neglect or development.

But that is why Korean archaeologists are so excited by the recent discovery of the stone foundations from the inner chamber of one palace, from inside Bukhansanseong Fortress in Goyang, Gyeonggi. The palace was built in 1712 but buried in a landslide in 1915. It consisted of an outer quarters where the king worked and an inner quarters where he rested. Experts say the finding is by far the best-preserved remains of a temporary palace. 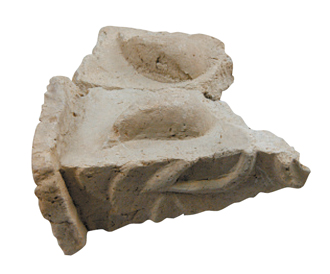 A piece of roof decoration is one of the many relics unearthed at the site.

The Gyeonggi Institute of Cultural Properties, which operates under the Gyeonggi Cultural Foundation, announced earlier this month the results of the first round of archaeological excavations that have been taking place since October of last year.

“What was written in the 1745 palace record ‘Bukhanji’ matches with the excavated stonework,” the institute said in a press release. “The inner quarters consisted of the living room in the center and two rooms on the sides equipped with ondol [traditional underfloor heating system].”

“In the center axis of the structure is the eodo [path for the king], main gate and staircase. The materials and methods used display the advanced architectural techniques of the times … while the sewage system and the use of different materials for the boundary walls show the splendor appropriate for a palace.”

Also found at the site were various types of roof tiles bearing patterns of dragons, a phoenix and flowers, decorative pieces and figurines and metal parts used in the construction.

So which kings of the Joseon Dynasty stayed at the site? King Sukjong (1661-1720), best known for his femme-fatale concubine Hee-bin, was one, as the palace was built in the 38th year of his reign.

In addition, King Yeongjo (1694-1776), a benevolent king who was the longest ruler of Joseon, likely stayed there.

So how were the remains of the temporary palace able to be so well preserved?

The Gyeonggi Institute of Cultural Properties says that the palace’s location, high up on Mount Bukhan, helped a lot. The area is also within a national parks, so public access was limited.

With the latest finding, Korean historians have obtained an important piece of real-life data that gives them a glimpse into the structure, size and building methods of the inner quarters of the palaces.

They say with the data, they can better reconstruct the architectural styles of the latter part of the Joseon Dynasty, especially the temporary palace within Bukhansanseong Fortress.

Next up, researchers have started excavations on the outer quarters of the palace. The site of temporary palace in Bukhansanseong is designated as Korea’s Historic Site No. 479.