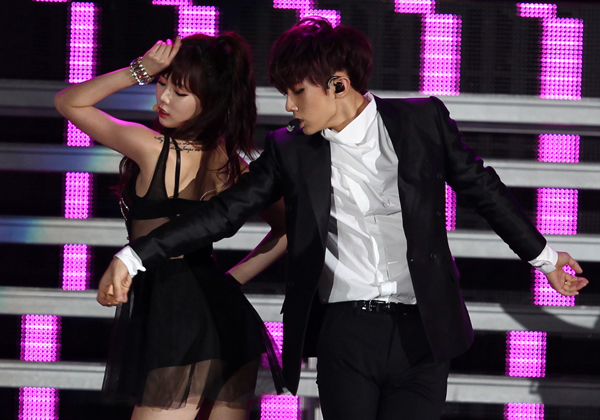 “Chemistry,” the new mini-album by Trouble Maker - a duo comprised of HyunA of the girl group 4Minute and Hyunseung of the boy group Beast - is getting quite a reaction, topping the local music charts yesterday almost instantly after its midnight release.

All five songs are doing well, led by the first single “There Is No Tomorrow (Now).” The provocative music video, which features HyunA and Hyunseung in a turbulent relationship in a trailer, with plenty of kissing, drinking, fighting and skin, racked up more than 1.5 million Youtube videos as of press time yesterday.

“There Is No Tomorrow (Now)” was composed by the popular Korean producer Shinsadong Tiger, who was also responsible for the duo’s big hit “Trouble Maker” in 2011.

In the unisex world of K-pop, a boy-girl duo like Trouble Maker is uncommon, presenting a style that is edgier than usual.

The two will make their first live appearance for their new release tomorrow on “Show Champion” on the cable channel MBC Music.