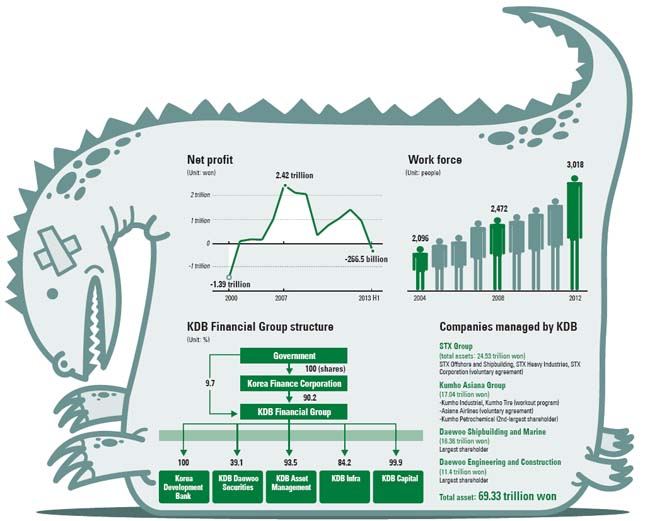 Although Daewoo Securities explained the appointment as part of an overall reshuffle aimed at “strengthening group synergy,” industry insiders criticized the new senior vice president post as being created only to offer a job to Lee as a former official from the state-run bank.

KDB faced a parliamentary audit session yesterday, however, lawmakers for some time have been harsh critics of KDB’s parachute appointments and careless management. In political circles, KDB is known as a “runaway dinosaur” in the financial and corporate world that destroyed the business ecosystem. Lawmakers are even making strong arguments that KDB must be reformed.

Among KDB affiliates purchased after they went financially sour like Daewoo Shipbuilding and Marine and Daewoo Engineering and Construction or companies under restructuring programs like Kumho Asiana Group and STX Group, KDB owns assets worth 69.3 trillion won ($65.3 billion). That ranks seventh among conglomerates after Posco, which has 81.09 trillion won in assets.

According to Representative Lee Sang-jik of the main opposition Democratic Party, from 2008 through July 2013, of the 524 retired KDB officials, 73, or 14 percent, have been hired as senior-level officials by companies with shares held by KDB or project-financing companies that received investments from KDB. They include two chief executives, 26 inspectors, 15 chief financial officers and 13 vice presidents. The vast majority - 65, or 89 percent - were hired within a month after they retired from their KDB posts, and some were even hired one month before they were due to retire.

“We are concerned about the relationship formed if KDB officials are offered parachute hiring by companies that do business with KDB or those that receive investments,” said Lee.

A former vice chairman of KDB, surnamed Lee, also currently works as a golf club’s chief executive in Yongin, Gyeonggi. The golf club is owned by Daewoo Shipbuilding and Marine, which is an affiliate of KDB. Lee became chief executive after holding posts as an outside director at Kumho Industrial and chairman of the board of directors at Daewoo Securities. The companies he had joined previously are those KDB is pushing for restructuring or in which it is a major shareholder.

“It’s really hard to understand the fact that a golf club is given to a former KDB official to manage where the duties are not related to his skills,” said an official from the financial industry.

There also is mounting criticism that KDB maintains its control of the business sector by expanding its areas of engagement and because of the placement of former KDB officials.

“KDB is entering industries occupied by other brokerage firms or private banks by not only focusing on providing policy funds, but also being involved in investment banking business and retail banking,” said one financial industry official.

In the first half of this year, KDB recorded a 266.5 billion won net loss. If the state-run bank isn’t able to make up for the loss in the second half of this year, it would post an annual deficit for the first time since 2000. KDB says its performance so far this year has deteriorated because of the restructuring in place at STX Group, but industry insiders note the “falling profit is because KDB invested aggressively in STX without thinking about the risks.”

From 2007-8, KDB gave out loans aggressively to STX Group that currently amount to a total of 4.82 trillion won. The reason KDB was able to make bold decisions in investing in STX Group is because of a law that states “KDB’s losses will be made up by the government.”

“There seems to be a tendency that KDB uses excessive funds while trusting that the government will make up for any losses,” said a banking executive.