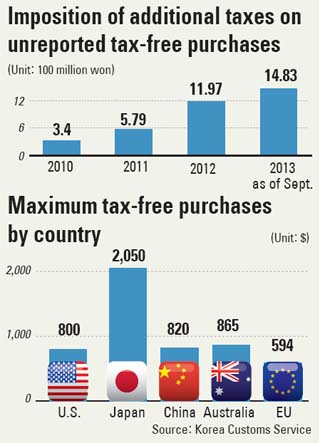 Increasing numbers of international travelers have been complaining about a luggage crackdown by the Korea Customs Service.

The number of Koreans who have been slapped with additional taxes for not reporting items worth more than $400 bought at duty-free shops has more than tripled in the past three years.

As part of the Park Geun-hye government’s efforts to increase revenue, customs has stepped up baggage inspections.

At a parliamentary probe of the customs agency on Monday, a proposal to raise the $400 maximum purchase amount triggered disagreement between lawmakers and government officials.

According to Lee Nak-yon of the Democratic Party, there were nearly 46,500 cases of additional taxes imposed on travelers through September this year compared to 2012. The total amount of additional tax payments reached 1.48 billion won ($13.9 million), up from 1.19 billion won last year. That is five times the amount assessed in 2010.

“The maximum should be raised to a realistic level,” Lee argued.

The United States sets it at $800. China’s is about $820. Japan’s is as high as $2,050, increased in the late 1980s when the country was enjoying huge trade surpluses to encourage Japanese consumers to spend more. Hong Kong has no ceiling.

The Korea Customs Service tried to increase the ceiling in 2011 because there were so many violators and enforcement costs soared. According to the agency, it examined 480,000 people in 2010, about 2.5 percent of all travelers, and caught 73 percent with more than $400 worth of tax-free items.

Research also has found that Korea’s ceiling is relatively low. An appropriate level is $610 to $620, considering the country’s per capita income in 2010, the research suggested.

Since conditions have changed with the implementation of free trade agreements with the United States and European Union, the ceiling needs to be adjusted, the research said.

“Customs policies were made in order to protect domestic industries, but expansion of FTAs with major countries that provide consumers with cheaper products is aimed at increasing people’s welfare,” the report said. “In line with the change, the tax-free ceiling needs to be changed.”

However, the attempt failed based on the issue of equitable taxation.

“Those opposed to raising the ceiling say it is unfair to exempt taxes on people who are affluent enough to afford overseas travel, accounting for 15 percent of the total population,” said an official at the customs office. “The outbreak of global financial crises and continuing external uncertainties also made it hard for the government to revise the policy.”

Some travelers who get caught complain about the randomness of baggage inspections.

“One of my acquaintances bought three Chanel bags in Germany and about $1,000 worth of cosmetics and stuff at duty-free shops, but she wasn’t even on the government’s list to be examined,” said a 30-year-old traveler who returned from Paris recently. “But I was searched for buying a $600 Prada wallet.”

The Federation of Korean Industries last year included raising the ceiling on its list of 206 regulations that need to be reformed.

The Ministry of Strategy and Finance, however, says it is not the right time to take action.

“It is difficult to judge because of the principle of taxation fairness,” an official said. “Economic conditions need to be better off to start discussing the issue.”