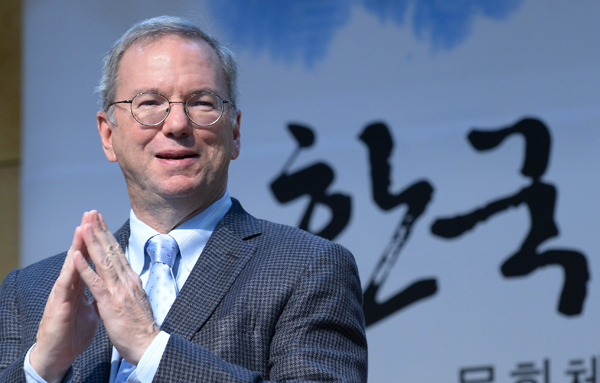 Can Samsung’s rally of strong sales show that the company has shed its unflattering tag as a follower? Google CEO Eric Schmidt believes so.

“The No. 1 phone in the world is the Samsung Galaxy S4, which is beating the iPhone 5. Congratulations, Samsung,” Schmidt said during an exclusive interview with the JoongAng Ilbo yesterday. “That’s not a fast follower.”

Last Friday, Samsung confirmed its record-high performance in the third quarter, including 6.7 trillion won ($6.3 billion) in operating profit from its mobile sector.

“I would say Samsung has done an excellent job of defining this market,” said Schmidt.

While enjoying its sales success, Samsung has made a series of moves to make inroads into the software sector. The latest came in the form of hosting its first-ever developer conference in San Francisco on Tuesday.

“We have told them the most important priority for Google is the development and maintenance of the Android ecosystem, to which Samsung is a leader,” he said. “I have made that commitment and they believe me.

“I don’t think it will change.”

Schmidt said Korea has much potential to be a software powerhouse and praised President Park Geun-hye’s creative economy initiative as “an excellent decision.” But he said the government’s role should be limited to assisting. He suggested providing more incentives for students studying software.

Equally important is an environment that encourages risk taking, he said.

Silicon Valley provides an environment where those who fail can easily join other projects.

“It is perfectly possible here in Seoul,” said Schmidt. “It’s possible to do things here, and in a Korean style, which works quickly.”

He said the two industrial pillars of the future are software and mobile computing, and Korea can play an important role in both.

“Every industry Korea is in - cars, even steel - would be transformed by software such as soft analytics, data analytics and big data,” he said.

Schmidt was in town to promote Google’s joint campaign with the Korean Ministry of Culture, Sports and Tourism to help fund the Hangul Museum being built at the National Museum of Korea in Yongsan, central Seoul. It is scheduled for completion next year.

Schmidt held a press conference yesterday morning at the museum to announce a set of new partnership programs to help expand the user base of Hangul, Korea’s written language, including developing a Web program for learning it.

Schmidt said King Sejong’s purpose in creating Hangul, which was to provide Korean people with a language essay to learn and use, is in line with Google’s mission to “organize the world’s information and make it universally accessible and useful.”