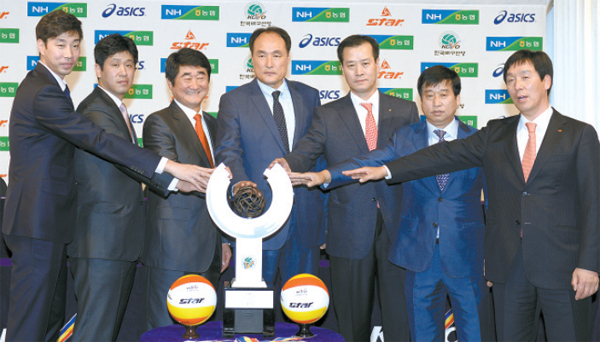 Coaches of the seven V-League teams pose with the league championship trophy on Monday at the Riviera Hotel in Gangnam, southern Seoul. [NEWSIS]

It looks like it will be tough for the Blue Fangs to win the season as they have lost many key players. Analysts predict they might finish last in the six-month season, while their biggest rival, the Hyundai Capital Skywalkers, might dominate the league as they have added some big-name veterans.

Blue Fangs coach Shin Chi-yong, who won the league for six consecutive seasons, predicted Monday that his team will finish last in the season.

“I think Hyundai Capital is the strongest contender for this season,” Shin said. “Korean Air and Woori Card Hansae [Stork] will be the biggest rivals to Hyundai, while four teams will be in the middle of the race, and we will be the last one.”

When Shin made this prediction, fans and even other coaches booed him, saying he is trying to deceive opponents.

“It was one of the typical comments Shin makes every time before the season begins,” said Kim Ho-chul, who returned to the Skywalkers as the manager this season. “We can’t produce such outcomes until we play against each other, especially with the Blue Fangs and the Jumbos.”

But no matter how Kim thinks, it looks like the Blue Fangs will have a tough season. Their biggest worry is defense. Veteran defender Yeo Oh-hyun, 36, who also has been playing for the Korean national team, signed a three-year contract with the rival Skywalkers.

Another veteran defender, Seok Jin-wook, 37, retired after last season and joined the new team, Rush & Cash Vespid, as a coach this year. Attacker Shin U-ddeum, 26, who will return to the league after finishing his military duty, was traded to the Woori Card Hansae and another 26-year-old attacker left the team to begin his military service, while attacker Choi Hong-jung was traded to the Vespid.

The Blue Fangs signed free agent Lee Kang-joo to fill Yeo’s space and also signed center Lee Seon-gyu, but it looks like that won’t be enough to win the season. They will likely rely heavily on Cuban left attacker Leonardo Martinez, 23, who was the 2012-13 V-League season MVP.

While the Blue Fangs have lost players, their rivals, Hyundai Capital, acquired 28-year-old Colombian attacker Liberman Agamez, who is considered one of the top three attackers in the world, and the Korean Air Jumbos acquired 27-year-old Ukrainian attacker Michael Sanchez, who was the MVP of the Russian League last year.

The LIG Greaters, which analysts consider to be one of the bottom four teams, had many changes during the offseason and their biggest worry is the setter position. Veteran Kim Young-rae was traded to the Kepco Vixtorms and the team’s second-best setter, Lee Hyo-dong, will not be able to play in the beginning of the season due to injuries. So, 24-year-old Kwon Jun-hyung must fill that role. The Greaters expect their new acquisition, 2.12-meter (6-foot-9) Australia national team member Thomas Patrick Edgar, to lead their offense.

It looks like the season will be tough for the Vespid as most of their starting players are young.

“We know that it will be a tough season for us,” 39-year-old coach Kim Se-jin said. “All we have to do is do our best on the court.”

After the opening match tomorrow, the Hyundai Capital will match up versus Woori Card in Cheonan, South Chungcheong, and LIG will face off against Kepco in Gumi, North Gyeongsang, on Sunday.