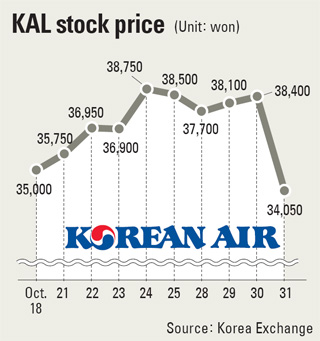 Korean Air Lines stock dropped the most in two years in Seoul trading on concerns the company may provide further funds to its affiliate Hanjin Shipping. Korea’s biggest carrier fell 11.33 percent to close at 34,050 won ($32.09), the largest drop since September 2011.

Korean Air said on Wednesday it will provide 150 billion won to Hanjin Shipping to help ease the company’s “temporary” liquidity shortage. Excess shipping capacity and a slump in freight rates have caused shipping companies including Hyundai Merchant Marine and STX Pan Ocean to lose money in the first half of the year. The announcement came after Korean Air last week posted a loss in the first nine months due to weak Japan travel demand.

“While it’s not a lot of money, the airline industry isn’t doing all that well,” said Um Kyung-a, an analyst at Shinyoung Securities. “Korean Air also has a lot of debt coming due next year.”

The company has about 745.1 billion won in bonds and loans maturing next year, compared with 47.7 billion won in 2013, according to data. Hanjin Shipping may post a loss in the third quarter, typically the best period for shipping companies, Daishin Securities said in a Sept. 30 report. Bloomberg