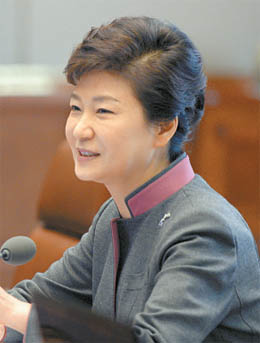 President Park Geun-hye finally broke her silence on the scandal over the National Intelligence Service and other state organizations allegedly carrying out online campaigns supporting her presidential candidacy last year and smearing her opponent.

She vowed yesterday to “strictly” investigate the allegations and promised that anyone found guilty will be punished.

“With only two months left in this year, it is very regrettable that urgent state affairs tied to past political issues remain pending,” she said at the first meeting with her senior secretaries in over a month. “As the prime minister emphasized days earlier, I will make sure various charges now in court and under investigation are clarified according to the law.”

The president stressed that although she “did not personally do anything to arouse suspicions,” government institutions are suspected of intervening in last year’s presidential campaign. She said any party found to have been engaged in those activities will be held accountable.

She also promised to adopt countermeasures against government institutions, as well as groups of civil servants or individual government officials violating “political neutrality.”

The president’s remarks came three days after Prime Minister Chung Hong-won told the nation that the government would identify the forces behind the alleged political dirty tricks.

Park expressed the wish to put the issue behind her so that the government could concentrate on more productive affairs such as boosting the economy. “Respective secretaries are reminded not to forget for a second that the greatest wish of the nation is for the government and political community to work toward a stabilization of their livelihood,” she said.

Park’s visit to three European countries that starts on Saturday - along with the ruling Saenuri Party’s victory in two by-elections Wednesday and the wrap up today of her administration’s first parliamentary audit - may provide a last spurt of momentum for her initial year at the helm.

The president will spend three days in Paris, followed by a three-day state visit to London at the invitation of Queen Elizabeth II, and a final two days in Brussels. It will be Park’s first official visit to Europe for bilateral talks with various leaders, and her itinerary is packed with cultural, diplomatic and business events. Cho Won-dong, senior secretary for economic affairs, said in a press briefing yesterday that the two biggest themes for the president’s Europe trip will be finance and the creative economy.

Her previous trip in October to Indonesia and Brunei for Asia-Pacific Economic Cooperation (APEC) and Association of Southeast Asian Nations (Asean) meetings, according to Cho, focused on helping Korean companies make inroads into those neighboring Asian countries. The priority this time will be partnerships between Korea and European countries. He cited the example of a Korean financial company joining a French counterpart to advance into third countries, such as African nations or Russia. The economic affairs secretary was particularly upbeat about the business prospects for the president’s trip to Britain.

“There are so many Memorandum of Understandings currently being discussed for signing during her visit that we can’t even come up with an exact number,” he said. The largest number of MOUs is expected to come between British financial regulators and Korean commercial banks.