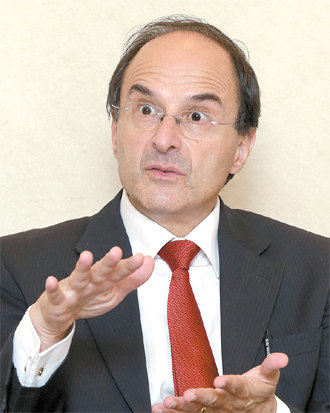 “The global economy is suffering from four ‘unsustainabilities,’ and I have solutions to this.“ he said in an interview Thursday with the Korea JoongAng Daily.

The policy adviser to German Chancellor Angela Merkel emphasized that countries, especially in the euro zone, should have the discipline to maintain debt-to-GDP ratios capable of sustaining fiscal policy.

He also said the world has to realize that economies in developed and emerging countries will grow slower and be realistic about recent upbeat announcements.

Q. What are the four unsustainable factors that have made the global economy so vulnerable?

Unsustainability of fiscal policy means governments can’t keep the ratio of debt-to-GDP from rising too much. When national debt rises too much, countries demand austerity, but that usually happens at the wrong time. Financial markets also are not sustainable, since they are not regulated or supervised in a sustainable way, partly because systemically relevant financial institutions have built-in incentives to generate excessive risk.

If you are too big to fail, you know you won’t fail, so you keep all profits, while taxpayers take the losses. My solution is that governments should have mandatory contingent convertible bonds, which means that when the capital-to-equity ratio falls below a certain level, the debt of a company is automatically converted to equity. That means institutions cannot go bankrupt, because the debt is converted into equity.

What do you mean by unsustainability in monetary policy and growth?

The third unsustainability is that of monetary policy. For many countries, there are many conflicting objectives. On one hand, they have the target to keep inflation at 2 percent or slightly above, while on the other hand, they need to stabilize financial markets. Because when central banks decide to maintain interest rates, that’s sort of destabilizing financial markets. But when they lower interest rates and ignore inflation, the public would realize central banks no longer are guardians of inflation. Then inflationary expectations no longer have an anchor. That would mean inflation would be much more likely to take off into the stratosphere. The last unsustainable factor is growth. That is, countries have not thought of good ways of stimulating growth. Since 2008, we had low interest rates. In a period like that, there is wonderful opportunity to invest in human capital and also in infrastructure. But such a big opportunity is lost now. In the future, a big challenge will be to promote growth while reducing inequalities. My proposal is to change the redistribution system. It’s not about redistributing money from the rich to poor. Instead, redistribute incentives. Take the unemployed and hire them. Give incentives to those who hire them. And give subsidies to train the unskilled. That the way everyone gains.

Do you think the European economy is improving?

Yes, but media should pay less attention to the average economic growth of various EU countries, which has been increasing a bit while wealth distribution has been much wider. You should look at probabilities of each rather than believing the average.

How do you forecast the global economy?

Globalization has slowed down since the 2008 financial crisis. One possibility is rich countries may not have capacity to grow more than 1.5 percent. Therefore we may have to get used to an era of slower growth for rich countries.