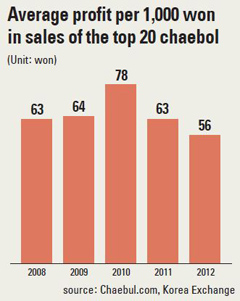 The profitability of 16 of the top 20 Korean conglomerates in 2012 worsened to levels below those recorded during the global economic crisis in 2008, and the downward trend has continued this year, according to market data.

Their operating profit margin, or margin ratio, averaged 5.6 percent, meaning they made 56 won ($0.05) on every 1,000 won in sales, according to the Korea Exchange and Chaebul.com. Combined sales were 1,076 trillion won against operating profit combined of 61 trillion won.

Only four of the 20 chaebol groups saw profitability improve over the past four years. Samsung Group, the country’s largest conglomerate, earned 104 won per 1,000 won in sales last year, which was up 67.7 percent. Hyundai Motor Group’s margin ratio rose from 63 won in 2008 to 77 won last year, while Lotte Group’s improved from 51 won to 57 won.

For this year, of the 569 Kospi-listed companies that have settlement of their accounts in December, 501 made their information available as of yesterday, and their average margin ratio - except for Samsung Electronics - dropped to 4.51 percent in the first half of the year from 4.7 percent during the same period last year.