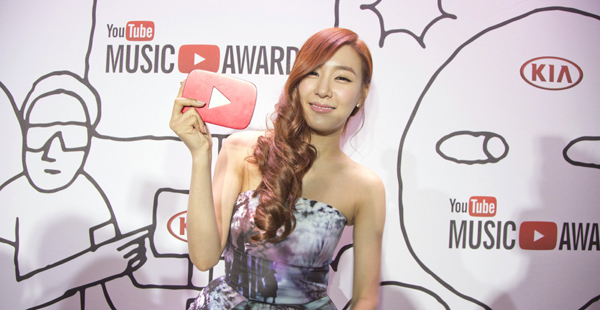 Tiffany of the musical group Girls’ Generation speaks to media after accepting the Video of the Year award at the YouTube Music Awards in New York on Sunday. [REUTERS/NEWS1]

NEW YORK - Korean idol band Girls’ Generation was among the winners of the first YouTube Music Awards on Sunday.

Girls’ Generation won the Video of the Year award with “I Got a Boy.” The idol band members are megastars in South Korea but are still making inroads into the U.S. music scene.

Tiffany, one of the band’s nine members, was present to accept the award on behalf of the group. She said in English during Sunday night’s live webcast from New York’s Pier 36 event space, “To be here at the first-ever YouTube Music Awards is a treat in itself, but to win the Video of the Year, this is absolutely unexpected and exciting and altogether humbling at the same time.”

Another Korean musician, Psy, was nominated for three of the six categories: Artist of the Year, Video of the Year and Response of the Year (for videos that were remixed or parodied) with his 2012 global hit, “Gangnam Style,” and this year’s follow-up, “Gentleman.” But none of the awards went to the rapper.

The music awards show made a clear bid for the quirky, a benefit of being streamed by YouTube rather than broadcast on television.

If the music itself sometimes felt a little overshadowed by all the hoopla, it shouldn’t be a surprise. The show was also a sort of announcement by YouTube of its intentions to take a bigger role in the music industry.

The music awards market is almost as crowded as the music market. YouTube featured big stars such as Lady Gaga to attract attention, while keeping enough of an outsider perspective to differentiate itself from MTV, the Grammys and other music powerhouses. 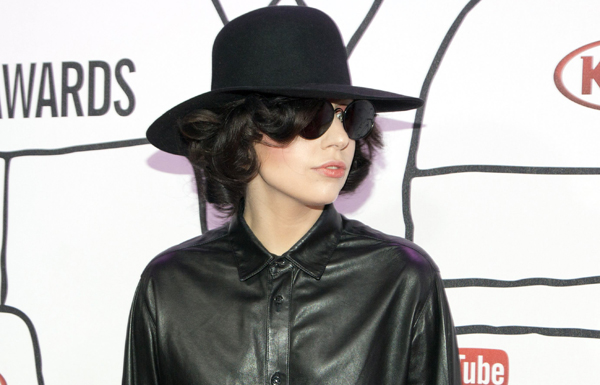 Although the Google-owned site has for years been a go-to place for music fans, it is expected to introduce a paid music service by the end of the year.

“There was nothing scripted tonight,” said actor Jason Schwartzman, who, along with performance artist Reggie Watts, hosted the show that was directed by Spike Jonze.

The Artist of the Year award was awarded to Eminem. Breakthrough of the Year went to hip-hop duo Macklemore and Ryan Lewis, whose songs include the gay rights anthem, “Same Love.”

Walk off the Earth, along with KRNFX, took the Phenomenon Award for their version of Taylor Swift’s “I Knew You Were Trouble,” while the Innovation Prize went to DeStorm, who won for “See Me Standing.”

The Response of the Year prize went to Lindsey Stirling and Pentatonix, for their cover of Imagine Dragons “Radioactive.” Stirling is a celebrity among violinists but lacks the star power of Katy Perry, another of the night’s nominees.

Along with Gaga, there was a shaky-cam performance by Tyler, the Creator, and Earl Sweatshirt, both of the Odd Future Wolf Gang Kill Them All hip-hop collective. There were cultural references, including the quirky “The Fox (What Does the Fox Say?)” from Norwegian duo Ylvis, a viral hit earlier this year.

YouTube has positioned itself in recent years as a major source of new music videos for fans. Sites such as YouTube effectively function as on-demand stations for music, with fans able to listen to playlists over and over just for watching the occasional commercial.

The shift highlights some of the challenges - and opportunities - for artists. Access to music is easier than it’s ever been, thanks to such sites, music blogs, file-sharing software and more. But it’s also become that much more difficult for musicians to earn a living.