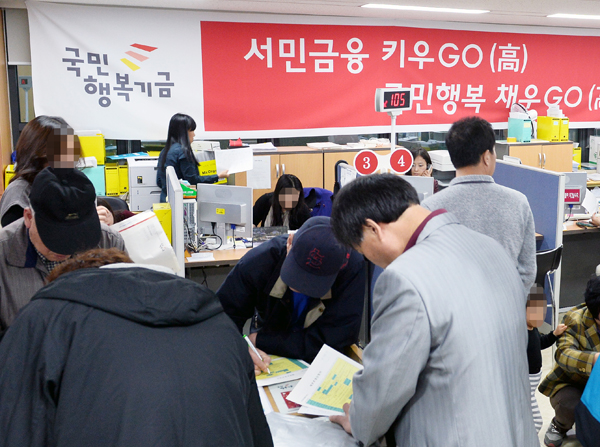 When the Financial Services Commission introduced a new debt relief program earlier this year to help low-income citizens write off their overdue debt, many were skeptical.

Questions were raised over how efficient the National Happiness Fund program would be in helping debtors regain their credit - not by their own efforts, but with support from the government - and tackling the snowballing household debt problem.

Yesterday, however, FSC data showed that more than 240,000 persons turned to the program by the Oct. 31 deadline to restructure their debt, and more than 86 percent will receive benefits.

“A total of 247,000 debtors with overdue loans at financial institutions and private lenders submitted applications to receive debt-restructuring help from the government, and we have confirmed 214,000 will receive support,” said an FSC official. “We are also trying to devise measures to provide additional help to those who have been excluded from the confirmation list.”

The government, through Korea Asset Management Corporation branches and Financial Supervisory Service support centers, started accepting applications on April 22 from borrowers with less than 100 million won ($94,000) in debt and those that have been in arrears for more than six months.

The government’s plan is to write off as much as 70 percent of citizens’ debt depending on income level. The aim of the fund is to have at least 50 percent of their debt written off while the balance is left to debtors to repay over an extended period of up to 10 years.

“When we first introduced the National Happiness Fund plan in March, we aimed to write off debts for a total of 326,000 borrowers over the five years of the program,” the official said. “However, we will be providing financial support to 65.6 percent, or 214,000 debtors, out of the 326,000 borrowers in the first year.” 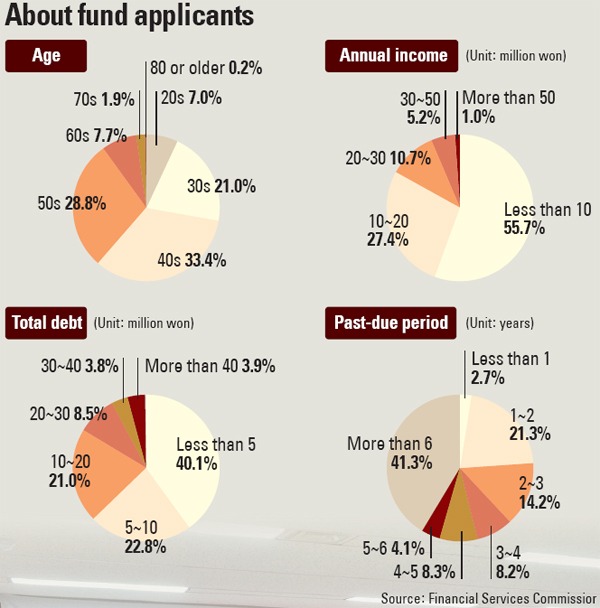 The program has been at the center of controversy, with some saying the Happiness Fund could discourage people who have been diligent in repaying their debts from continuing to do so.

However, the FSC said yesterday, “There is no big moral hazard problem ... those in need of desperate help will receive support.”

The FSC yesterday disclosed information about the applicants and recipients of benefits by randomly selecting 135,188 of the 214,000 debtors that will be receiving financial support from the government to pay their debts.

Based on its analysis, a majority of applicants receiving help are individuals from low-income households that have been suffering from long-term overdue debt.

It showed 55.7 percent earned less than 10 million won annually and 41.3 percent have been in arrears for more than six years.

The average amount of overdue debt was 11.47 million won.

Those with less than 5 million won in debt accounted for 40.1 percent of the total number of people receiving support, which shows that many applicants are those in the low-income bracket that have been living as delinquent borrowers for a long time.

“We will continuously monitor these debtors so that they are able to pay back the remaining debt they have as soon as possible and stand on their own feet,” said another FSC official.

“For those who are not able to repay the remaining debt, we will link them to a job program run by the Labor Ministry to help them find new jobs.”