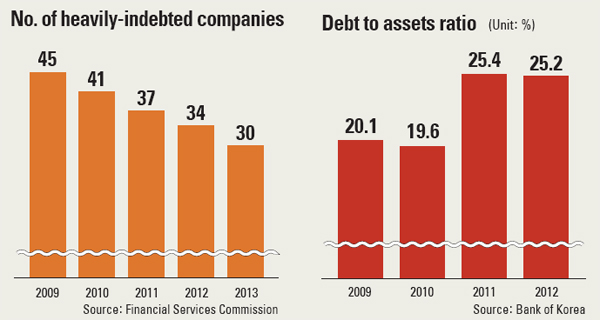 More large companies with unsecured debt will be included in the watch list of the country’s financial regulator next year, the Financial Services Commission said yesterday.

Currently, there are 30 high-debt companies that were identified by the regulator in April and being watched closely by creditor banks.

However, next year, the number of companies referred to as primary debtors is expected to increase to 45 as part of the government’s efforts to prevent large companies from turning insolvent.

“Recovery in the economy has been slow and because of this, profitability and financial soundness of large companies have deteriorated, raising concerns over additional liquidity problems,” Kim Yong-beom, director-general at the FSC, said yesterday. “Business figures at large companies such as sales growth and interest coverage rates have been aggravated since 2010, and their financial sheets have worsened as they depend excessively on loans.”

Kim added that there is a need to improve the country’s overall debt-monitoring system so that additional liquidity crises can be prevented in the future.

In recent years, the country has seen a number of corporate bankruptcies, including Woongjin Group, STX Group and Tongyang Group. According to a report released by Chaebul.com last month, the total amount of liabilities held by Korea’s top 30 companies reached 574.9 trillion won ($541.8 billion) as of last year, up 83.2 percent from 313.8 trillion won at the end of 2007.

“Economic conditions for businesses have worsened since the global financial crisis,” said an industry official. “There are mounting worries because despite bad conditions, companies have aggressively expanded their businesses, adding more debt.”

A recent report by the Bank of Korea showed that the sales growth rate of large companies was 18.5 percent in 2010, but last year, the figure plunged to 5.1 percent. Meanwhile, the ratio of total borrowing to total assets increased from 19.6 percent to 25.2 percent over the same period.

“The need for close monitoring of large companies is growing more than ever now, but the number of companies under the government’s watch list that are categorized as primary debtors has been in a decline since 2009,” said Kim of the FSC.

According to FSC data, the number of highly indebted companies selected by the regulator to be under close watch has been in a decline over the past several years. In 2009, there were 45 companies in the group of primary debtors. The number fell to 41 in 2010 and 37 the following year. In 2012, a total of 34 companies were looked after by creditors and now only 30 companies are.

Primary debtors are selected by the FSC every year if their total amount of bank loans is equivalent to or more than 0.1 percent of the total lending by financial institutions. From next year, however, the regulator has become stricter, and large companies with loans equivalent to or more than 0.075 percent of banks’ total lending will be categorized as primary debtors and be placed under constant watch by creditors.

Primary debtors are given instructions by creditors to help reduce their debts, and starting next year, if they refuse to follow the instructions, they will face replacement of management or interest rate increases for loans they received.

The FSC’s move comes amid criticism raised against the financial regulator and the Financial Supervisory Service for not having monitored the securities affiliate of Tongyang Group properly, which eventually led more than 490,000 individuals to invest in bad credit bonds. Tongyang Group had been under heavy debt, and it managed to pay back its maturing loans by having Tongyang Securities issue corporate bonds and commercial paper of its ailing affiliates and sell them to retail investors.

The Tongyang Group crisis, meanwhile, has only added to the problems facing the country’s corporate bond market. Industry sources note that since April, no corporate bonds with a credit rating of BB or lower have been issued because of the bad investment climate, making it more difficult for mainly small and midsize companies to finance their projects.