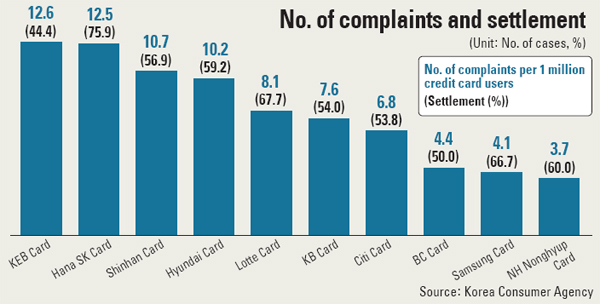 Korea Exchange Bank received the most complaints and had the lowest settlement rate, according to the agency.

The Credit Card Standard Terms for Individual Members stipulate that value-added services must be maintained without reduction for at least a year and card companies must inform customers six months prior to any changes through the following methods: Web site, credit card statement, mail or e-mail.

The KCA said that because value-added benefits are factors in choosing cards, they should be maintained longer and users should be notified sooner.

“The stipulated method of informing consumers could lead to complaints as they could often fail to check [the information given to them]. Credit card companies need to expand the number of notices and the methods, such as informing consumers once a month through text messages for six months prior to changes,” said a spokesman for the KCA.