Next to N.Y. and Tokyo, Seoul rents a bargain

Next to N.Y. and Tokyo, Seoul rents a bargain 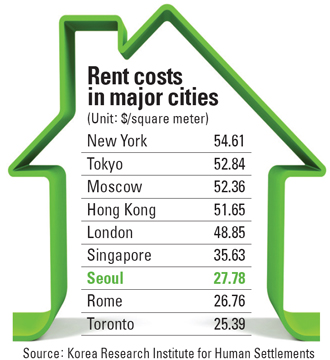 A government research institute survey found the average rental fee for an apartment in southern Seoul is 30,000 won ($27.78) per square meter, more expensive than in Rome, but cheaper than Singapore.

According to the survey by Korea Research Institute for Human Settlements under the Ministry of Land, Infrastructure and Transport released yesterday, the world’s most expensive city in terms of rent is New York ($54.60), followed by Tokyo ($52.80), Moscow ($52.40) and Hong Kong ($51.6) among 19 cities surveyed.

Compared to Asian cities, Seoul’s rent per square meter turned out to be lower than in Tokyo, Hong Kong and Singapore, but higher than Mumbai.

The proportion of monthly contracts started to grow from 22 percent in January 2011 to about 40 percent this year. “When converted into monthly contracts, rents go up 7 percent to 9 percent, burdening tenants,” said Cho Joo-hyun, a professor at Konkuk University.

Rental increases fell from 11.3 percent in 2010 to 9.7 percent in September, according to a report by the Korea Development Institute.

“As one-person households increase and the ratio declines, more landlords to change their jeonse contracts into monthly,” the KDI report said.