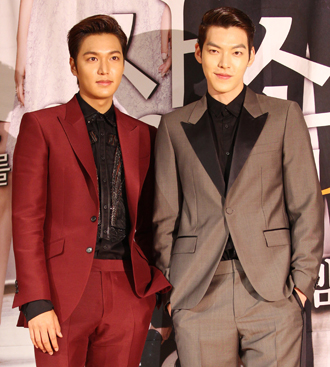 Cast members of the SBS drama “The Inheritors” delivered a message yesterday to students taking the suneung, the college entrance exam, today.

Four of the main actors and actresses, including actors Lee Min-ho and Kim Woo-bin, and actresses Park Shin-hye and Kim Ji-won, showed their encouragement to the test takers through photographs. They each held a piece of paper autographed with their name to show support.

Lee also said on social media that he hopes his fans do well on the test.

“Test takers, don’t get nervous, don’t get sick, and show all of your talents, and I wish your efforts bring you a good result,” he said.

“There are more fun things to come in the future.”

Actor Kim reportedly said through the drama’s production company that it is important to be in superb physical condition before the big day.