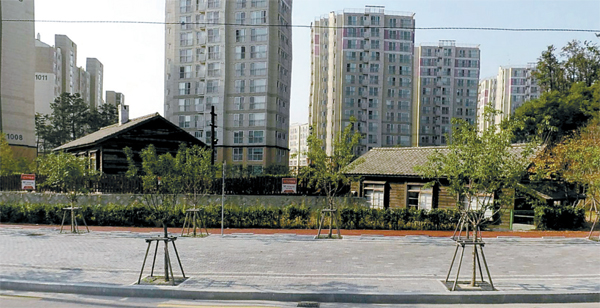 These two wooden houses located in Sangam-dong, northwestern Seoul, used to be residences for Japanese military officials in the 1930s.Provided by the Cultural Heritage Administration

There are two small wooden homes that sit abandoned in front of the Sangam World Cup Apartment complex in Sangam-dong, northwestern Seoul. The door to one was unlocked. It opened to reveal three empty rooms, containing only small TV screens showing CCTV footage from the area around the two houses. Next to the screens were two empty plastic water bottles and a cell phone charger. The other house was firmly locked.

“You can’t go in there,” said a janitor in charge of the buildings as he saw me trying the door. “The district office ordered me not to open doors to anyone. There is only a toilet and a kitchen.”

The homes are old, built in the 1930s as official residences for Japanese commissioned officers in charge of the railway that was once located nearby. When SH Corporation, a state-run construction company, was developing a large housing site in the area in 2005, 22 of these residences were discovered in the area. At that time, the Cultural Heritage Administration believed the buildings carried “preservation value” and together with the SH Corporation, restored the two buildings at a cost of 1.3 billion won ($1.23 million). The restoration was completed in October 2010.

In front of the buildings, a sign went up that said: “This area was established as Japan was preparing a full-fledged invasion of the continent. It’s the only existing Japanese military housing area in Korea that remains today, therefore, it carries significant value as a historical remnant, showing the suffering of modern history.”

After the restoration, the SH Corporation and Cultural Heritage Administration tried to register the two houses as cultural properties, but local residents fiercely opposed the move, criticizing the buildings as “vestiges of Japanese imperialism.” In the face of opposition, the Cultural Heritage Administration gave up its plan, and the buildings have been abandoned ever since.

Three years have passed and nothing has been done, nor have the residents’ feelings changed.

“I just wish such ugly buildings would vanish,” said Tak Yang-ja, 76, who lives nearby. “Whenever I go past [them], it reminds me of the bad things Japan does, like insisting the Dokdo islets are their property. It’s not even educational for children.”

Lee Chang-ryeol, 20, a resident in the area, feels the same.

“I heard the buildings were restored at a cost of billions of won because there’s a Japanese school nearby,” Lee said. “It’s a waste of money. I hope they just turn this place into somewhere residents can come and rest.”

A man in his 40s, who was casually walking past, stopped and urinated on the stone wall by the houses.

Samrye granary in Wanju County, North Jeolla, which was built during the Japanese colonial period, has been renovated to be used as a cultural arts center for the public.Provided by Wanju County Office

Despite the fiery opposition from the residents, the Cultural Heritage Administration is still firmly set on registering the buildings as cultural properties. When Representative Park Seong-ho of the Saenuri Party questioned the administration’s plans in a recent National Assembly inquiry, the administration replied that they are “continually consulting with local governments to change Koreans’ perceptions of the Japanese colonial era and, through long-term persuasion of the residents, we are planning to push ahead with registering the buildings as cultural properties.”

In a written reply, the administration added, “Despite some considering the buildings as humiliating historical remnants, they should be preserved so that future generations accept history as it was, as the truth. We also believe they are useful as educational venues where students can come and see and learn.”

The opinions of civic groups and experts are also split.

“What kind of historical lessons can we learn from a residence of the Japanese military?” asked Song Tae-kyung, head of the History Restoration Public Movement Headquarters. “They are just two ugly and humiliating buildings.”

Bok Gi-dae, a research professor of fusion archeology at Inha University, agreed. “If left as they are now, it will look like Koreans are commemorating the Sino-Japanese War,” Bok said. “If it’s not being managed properly or abandoned like today, it should be demolished as soon as possible.”

On the other hand, Hwang Pyeong-wu, chairman of the Korea Cultural Heritage Policy Research Institute, insists that not all cultural properties are about glorifying the past.

Ahn Chang-mo, a professor of architecture at Kyonggi University who took part in the restoration, noted that the buildings are a reminder of Japan’s “war of aggression and the harm they inflicted on others.”

Navigating such conflicting opinions is tough for local governments.

“In 2012, when the Cultural Heritage Administration tried to register [the buildings] as cultural properties, residents were solidly opposed to the plan, so it got scrapped,” said Yoo Ho-seon, an official in the Mapo District Office. “When residents feel the same way, it’s difficult for a local government to push ahead with anything. But we can’t abandon the buildings anymore, so we are looking into how to utilize them.”

The Cultural Heritage Administration is also pushing ahead with registering two other locations related to the Japanese colonial era. The JoongAng Ilbo obtained a heritage administration document from the office of Saenuri Representative Park about preserving historic properties from the colonial era. According to the document, the Mangyeong River Railroad Bridge in Wanju County, North Jeolla, which was built in July 1928, and the Samrye granary, which is thought to have been built in the 1920s, are soon to be registered as cultural properties.

The railroad bridge across the Mangyeong River is 2 meters (6 feet 6 inches) wide and 475 meters long, and was used during the Japanese colonial era for moving agricultural products from the Honam plains. It is owned by the Ministry of Land, Infrastructure and Transport, but it is being managed by the Korea Rail Network Authority.

The Samrye granary is considered to be evidence of Japan’s colonial policies for increasing the production of rice products. Wanju County repaired the granary and now uses it as a cultural arts center. It contains the Media Art Gallery and Cultural Cafe.

There is no opposition from local residents about registering either of those structures as cultural properties. The Wanju County Office also supports the plan. The Cultural Heritage Administration said it has been collecting opinions, and deliberations about the future of the two properties will begin this month.

“Although the Samrye granary carries painful historical memories, Nonghyup [the National Agricultural Cooperative Federation] used it after the Japanese colonial era as a rice granary, and instead of demolishing it, it’s now being used as a cultural arts center,” said a Wanju official. 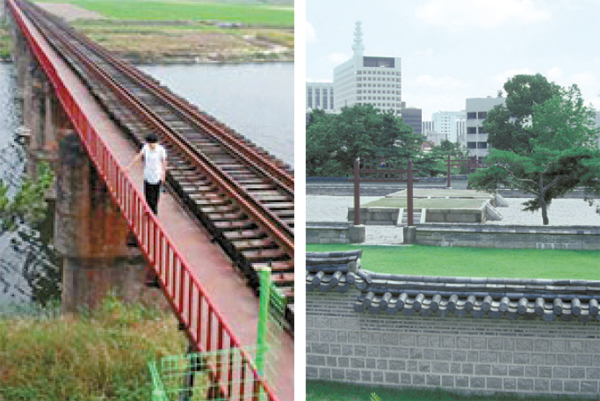 “The Cultural Heritage Administration has been eager to preserve the Japanese military housing site, saying it carries historical value, although I think it’s a disgrace,” said Park of the Saenuri Party. “Meanwhile, it has been negligent in restoring properties that carry our people’s spirits, such as the Seorin Sajikdan.”

The Sajikdan is an altar that was built by the first king of the Joseon Dynasty (1392-1910) to worship the gods of the earth and the harvest. However, as part of their efforts to subdue Korea, the Japanese took the altar from King Sunjong in 1911. In 1922, the Japanese degraded the location by turning it into Sajik Park and abolished the ceremony.

In 1962, due to the government’s plans to develop Seoul, the main gate to Sajikdan was moved 14 meters backward from its initial location and unrelated facilities - including a children’s library, a local office and a playground - were established on the site. Saenuri representatives are looking into introducing a bill for restoring Sajikdan near Gyeongbok Palace, central Seoul.

Experts agree with the arguments raised by the Saenuri Party representatives and said that the current standards for registering and restoring cultural properties are vague. In addition, they say that the Cultural Heritage Administration lacks both the money and authority it needs to get things done.

“To restore the area around Sajikdan, the Cultural Heritage Administration must first purchase the land, but it lacks the budget and the authority to convince local governments on the issue,” said professor Ahn.

“Local gossip has it that the SH Corporation helped out [in Sangam-dong] because it wanted to locate a Japanese school nearby,” he added.

The budget for the Cultural Heritage Administration has increased from 521.2 billion won in 2010 to 603.1 billion won for 2014. However, it still lags significantly behind the level of other developed countries.

“On average, in the OECD, about 0.24 percent of national budgets go to a country’s cultural heritage administration. But in Korea, it’s 0.17 percent,” said an official from the Cultural Heritage Administration. “Compared to other institutions or ministries, the rate of increase is relatively low, despite the increasing demand.”

Experts also insist that there is a lack of human resources in Korea for taking care of the country’s past.

“Currently, many of the officials in the Modern Cultural Heritage Division at the heritage administration are in administrative positions,” said one cultural expert who wished to remain anonymous. “But there aren’t any professionals who can carry out the restoration of modern cultural heritage buildings.”

Another official in the Cultural Heritage Administration noted how there are no real standards for deciding which cultural heritage objects get registered or designated.

“Most of cultural heritage sites get demolished or disappear even before getting properly evaluated,” said the official. “We’re just trying to push ahead with registration procedures before it’s too late.”