‘The Fake’ presents a raw look at Christianity, belief in Korea

‘The Fake’ presents a raw look at Christianity, belief in Korea 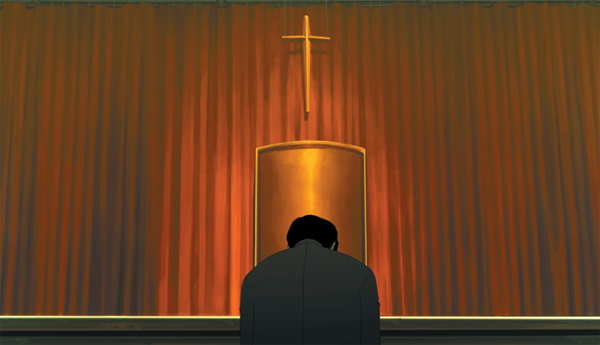 From the award-winning animation director Yeon Sang-ho, “The Fake” examines the Korean take on Christianity. Provided by New

In a country with 8.6 million Protestants and 5.1 million Catholics, along with some of the biggest congregations in the world, Christianity is always a big topic in Korea.

The Korean brand of Christianity, modified with a dose of local shamanism, has raised eyebrows time and time again, with media coverage of cults, tax evasion and the type of scandals that often accompany any large organization.

This year, a few local movies such as “Are You Ready?” and next week’s “Black Gospel” have questioned Korean churches and matters of faith, in particular, the Korean approach to it.

But perhaps the boldest of them all is Yeon Sang-ho’s latest animated movie, “The Fake.”

Yeon, who also directed the award-winning animation “King of Pigs,” said that he wanted to ask the question, “What do you believe in?”

Yeon’s works have always been controversial, satirical, inquisitive and dark. “The Fake,” which concentrates on religious cults in particular, is the culmination of all these motifs that have appeared very often.

The story unfolds in a rural town where the villagers have voted to accept compensation in return for being cleared out to make way for a dam.

A young factory worker named Kim Young-sun is on the brink of having her life turned around thanks to gaining admission to a college in Seoul. Overjoyed, Young-sun returns to her home to tell the news to her mom, who is in the middle of a prayer.

But Young-sun’s joy doesn’t last long, due to the return of her cruel drunkard of a father, who picks a fight with a charismatic church leader he thinks just wants to bilk people of their money.

For most people, animation signifies family-friendly works by Pixar, DreamWorks and the like, where the colors are pastel, the characters are cute and the plots optimistic.

“The Fake” has none of that, and as the plot thickens, it gets more and more depressing.

Life and the plight of those who are marginalized in Korean society are brought into harsh light against the backdrop of religion and beliefs.

The characters are varied and enigmatic, all with their own set of dramas that they try hard to keep hidden.

Then there’s the new-to-town Reverend Sung Chul-woo (Oh Jung-se) who has the passion, but lacks the sense to see his dream of building a holy sanctuary realized.

And then there’s Young-sun’s father, Kim Min-chul. The man is pure evil - he beats his wife and daughter, drinks heavily and gets into fights and all sorts of trouble - yet he is also one of the most relatable characters.

Then there are the people from that country town, delinquent teenagers, a bar madam, clueless policemen and those that just want to believe that there’s some hope for them, if not in this world, then in the next.

The scene that sums up the film in a nutshell is when a heated exchange takes place between the father and his daughter.

“They said that I was born to be loved,” cried Young-sun to her father. “They say that [God] loves me and has great plans for me, that there’s something better for me than this. Are you telling me that’s all a lie?”

“After this life there is nothing,” comes the lousy father’s quick reply. “And all the crap you’ve had to deal with is just your lot in life.”

And therein lie the two belief systems, battling it out in the film.

At times harrowing, other times hilariously obscene, Yeon has a masterful way of baring all while still keeping the mystery intact.