Stung by criticism that their cars are too expensive to maintain and repair, foreign auto brands are trying to combat that image by offering incentives such as extended prepaid regular maintenance and warranties.

Mercedes-Benz Korea announced Tuesday that it will expand its extended prepaid maintenance package to all models from the current two. For all owners of new cars whose free maintenance warranty expired, the automaker includes scheduled maintenance for three years or 100,000 kilometers (62,137 miles) with a smaller prepaid fee. 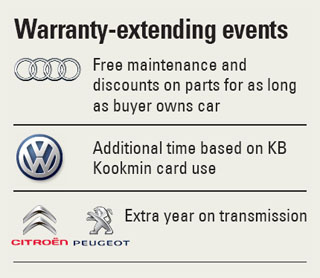 Audi Korea also offers free maintenance service to owners whose standard three-year warranties have expired. Eligible customers are those with vehicles registered between Oct. 1, 2009, and Oct. 31, 2010. The warranty covers 24 parts and offers a 20 percent discount on new parts.

In July, Audi and Volkswagen gave out an extra warranty year for about 600 car owners based on their amount of spending using KB Kookmin cards. Peugeot and Citroen also had a special event last month to add an extra year to their basic three-year transmission warranty.

“The Achilles’ heel [of foreign cars] is sharply increasing maintenance costs after the expiration of warranties,” said a foreign auto market insider. “The companies noticed that weakness and they are coming up with their own solutions.”

Local automakers, however, reportedly are poised to discontinue lower-priced current models in favor of pricey new ones.

Kia Motors released the new Soul, a makeover of its compact multipurpose car, last month. It also eliminated the two lowest-priced levels and raising the lowest price from 15.1 million won to 15.95 million won.

“We upgraded the convenience and safety specifications compared to previous models, but barely raised the price,” said a source from Hyundai and Kia.

On the other hand, GM Korea’s Chevrolet Cruze 1.4 Turbo caused disappointment with consumers who expected to see a strong turbo engine when its performance specifications were released. The new model features a 1.4 turbo engine rated at 130 horsepower, same as the company’s small SUV Trax.

However, the Cruze is rated 10 horsepower less than the Trax and it produces its maximum power at the high end (3,200 to 3,600 rpm) rather than at a lower, more practical level.

“I personally think that local auto brands are at a significant crossroads in terms of domestic sales. But I don’t think they are as concerned as much as they should be,” said an auto industry source who asked for anonymity. “When responding like this, it would be difficult to stop the foreign automakers from continuing to increase their domestic market share.”