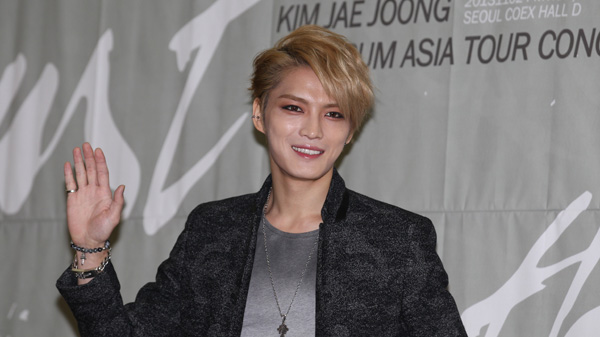 Kim Jae-joong brought Japan’s Haneda Airport to a standstill yesterday morning when he landed. Kim is scheduled to perform two shows, which will take place Friday and Saturday at Yokohama Stadium.

“Although he landed in secret, there were more than 700 fans waiting for Kim at the airport,” said a spokesperson from CJeS Entertainment.

“He’s begun rehearsing for the shows and in Japan, more than 60,000 [fans] will be attending,” said CJeS.

Kim released his first full-length solo album on Oct. 29 and has been busy promoting himself ever since. On Thursday, he held a live chat session in which more than 1.8 million messages were left for him by fans.

Kim’s album “WWW” stands for who, when and why - words that come and go with love. Kim composed and wrote songs and lyrics for the album.

Along with the album, Kim also kicked off his Asia tour, starting at the COEX mall two weekends ago in southeastern Seoul for some 14,000 fans.

At the Korean show, Kim surprised his fans with some big-name guests, including singers Kim Bum-soo and Gumi.