Hydrometallurgy may be gold mine

Hydrometallurgy may be gold mine 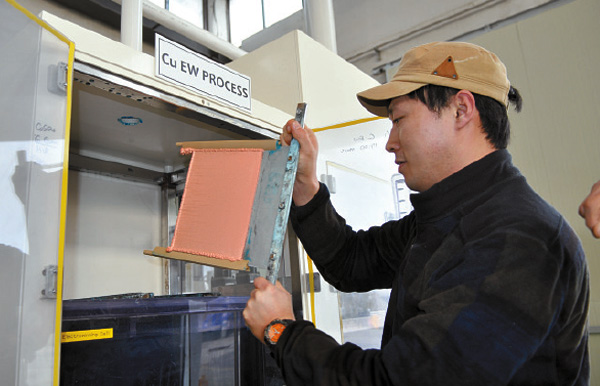 An employee removes a 99.5 percent pure copper plate from an electrowinning cell that separates metals from impurities at a pilot plant for the technology in Iksan, North Jeolla. Provided by the company

IKSAN - Korea Resources Corporation (Kores), a state-run developer of minerals and natural resources abroad, is in the middle of a transformation from mine hunter to operator as the first company in the country to secure core technology to extract metals.

To do that, Kores is operating a pilot plant in Iksan, North Jeolla, a tiny fraction of the size of a real plant under construction at the Boleo mine in Mexico, in order to make the technology as near perfect as possible.

About 20 tons of the metal ore excavated from the Mexican mine are being melted, ground and then extracted as small chunks of copper, zinc and cobalt. The ores include copper that is merely 0.05 percent pure; after being processed in the electrowinning cells at the pilot plant, it will be 99.5 percent pure.

“It is the first in the public or private sector to have such technology to extract metals from ores by using the hydrometallurgy method,” said Kong Bong-sung, executive vice president of the business support division. “If we complete this technology, Korea can discover any mine in the world. It is the most essential technology for a mining company like Kores.”

Kores was leading the national-level effort to hunt for resources. It participated in 38 projects to develop and explore mines around the world.

The company knew how to select and explore profitable mines, but it had no idea how to bring tangible products from there to Korea.

Kores President Koh Jung-sik, who took office last year, highlighted the need for the public company to start developing its own technology to produce metals out of coarse ores.

Since more and more minerals found in mines these days are oxidized minerals that are harder to excavate than sulfurized ones, it has become important for resource companies to have the hydrometallurgy technique to collect usable metals.

Hydrometallurgy involves melting ores, separating metals using solvents and then collecting the separated metal chunks into one plate through electrowinning.

It is not a new technology for advanced mining companies in Australia and Canada, but it is the first time it has been used by a Korean company.

By early next year, Kores plans to begin operations at the hydrometallurgy plant near the Boleo mine.

“If the plant operates well, we could make about 500 billion won [$470 million] in profit every year,” said a Kores executive. The company currently has 300 billion to 400 billion won in annual sales. Its debt ratio hovers around 180 percent due to continuous investment during the Lee administration.

The public resource company was brutally slammed by lawmakers early this month for wasting taxpayers’ money by finding overseas mines, but not showing results.

“Since Kores was a resource development promotion company during the last administration, we focused on making investments in various overseas mine projects,” said the executive. “But with the new CEO, we now aim to become a complete resource company that can take a full range of responsibilities, including finding profitable mines, exploring them, excavating ores and processing them into metals.”

Kores acquired a 70 percent stake in the Mexican mine from Canada-based Baja Mining early this year and became the sole operator of the mine. It started as a participant in the mine with a 30 percent stake in 2008.

No private company such as steelmaker Posco is currently able to do so.

“The capability to process ores into real metals is very important for Korea, which imports 99 percent of its major metals from abroad, in terms of ensuring resource security and stabilizing its industries,” Kong said.

“The Boleo mine is one of the most challenging mines in the world. So if we succeed there, we can go anywhere,” Kong said. “Our next task is to keep honing the technology and reducing costs to enhance the company with inner strengths.”