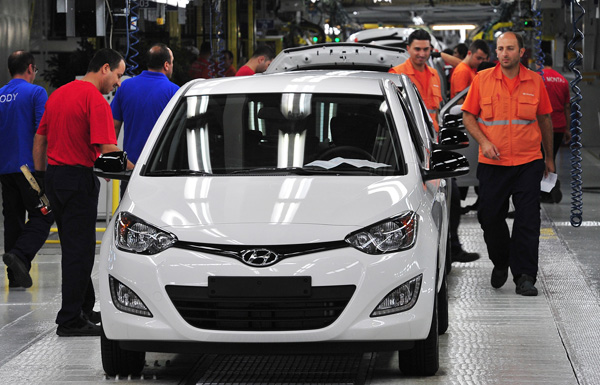 Employees at Hyundai Motor’s Turkish plant in Izmit inspect i10 and i20 models. The company recently completed a 634 million-dollar expansion. Provided by the company

IZMIT, Turkey - Hyundai Motor is now a global company producing vehicles in seven countries outside of Korea including the United States, China, India, the Czech Republic, Russia and Brazil.

But Turkey is where Hyundai first expanded into the global auto market. South Koreans call Turks “blood brothers” because they sent troops to the 1950-53 Korean War. And Hyundai’s plant in Izmit, a city about 120 kilometers (74 miles) east of Istanbul, is its oldest overseas plant, having been opened in 1997. 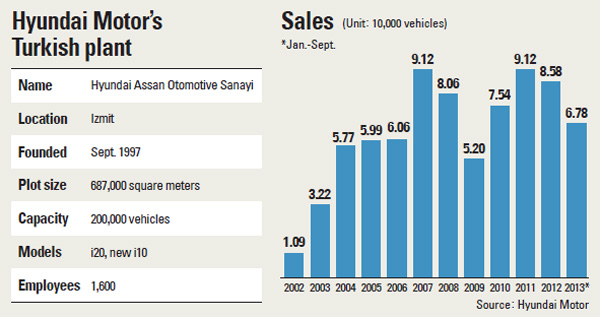 The Izmit plant is an essential part of Hyundai’s plan to expand its presence in the European market because it is the production base for manufacturing small cars like the i10 and i20.

Escaping the heavy traffic of Istanbul, Turkey’s largest city, and crossing the Bosphorus Bridge from Europe to Asia, a journey to the Izmit plant brings you along the easternmost part of the Sea of Marmara.

After a drive of about two hours, Hyundai Assan Otomotive Sanayi (HAOS), the official name of Hyundai’s Turkish plant, can be seen. It is located on 687,000 square meters (821,645 square yards) of land, and it has a very calm atmosphere.

Hyundai said the young population and the excellent geographic location - not only connecting Europe and Asia, but also within easy reach of the Middle East and North Africa - attracted the company to Turkey in the first place.

In addition, after Turkey signed a tax deal with the European Union in 1995 that allowed tariff exemptions on Turkish-made automobiles, Hyundai didn’t hesitate to choose Turkey as its first export hub for the European market. Nearly 90 percent of the cars produced in Turkey are now exported to other European countries.

The Turkish plant first produced compact cars like the Accent, Verna and Starex commercial van with annual production capacity reaching 60,000 units. It received its first upgrade in 2007, and capacity was expanded to 100,000 units. The factory also started making the multipurpose vehicle Matrix (also known as Lavita).

In 2010, the plant started rolling out i20 hatchbacks after the production of other models ended. The plant recently received its second upgrade to 200,000 production capacity after the company injected 475 million euros ($634 million). It also started manufacturing the new i10.

The i10s were previously built in India and exported to Europe, but Hyundai decided to make i10s in Turkey and emphasize its “Made in Europe” provenance for European customers. The new i10 began sales this month.

Starting next October, the Turkish plant will produce the next-generation i20. The hatchback will come out in three- and five-door models.

“Although A and B segments generate less margin compared to C and D segments, the market volume is about 4 million to 5 million units in Europe, but we are only selling about 80,000 or 90,000 units, which I think doesn’t match Hyundai’s reputation,” said Jin Byung-jin, the Turkish plant’s manager. “Our plant’s future looks bright as we will have full operation next year after the expansion and introduction of the new model and will reach our goal of selling 200,000 units.”

Hyundai will upgrade the production line for the second-generation i20 during a 10-day shutdown in February. When full operations start, Hyundai will be able to roll out 80,000 units of i10s and 120,000 units of i20s, although production volume can be changed depending on the market situation, according to Jin.

The Turkish plant is probably one of the cleanest Hyundai plants. It was difficult to find stains on the floor, while bright lighting and a robust air conditioning system gave the impression that this was a well-made working environment for employees.

“The workers’ mindset is really good here,” said Shin Hyun-doo, who is a manager at the plant. “We have lots of workers that have more than 10 years of experience, so it is easy to work with them.”

The recent expansion included the installation of 2,300 tons of pressing facilities at the press shop, which increased capacity by 30 percent. It also placed more welding robots for automobile body sheet welding, achieving an automation level of 100 percent and expanding the parts warehouses.

In addition, the company integrated the assembly line that was previously separated for i10s and i20s, allowing the factory to have mixed model production in one line.

The plant, which employs 1,600 employees, runs on two shifts, with first group working from 8 a.m. to 6 p.m., while the nocturnal shift goes from midnight to 8 a.m. Hyundai plans to have three shifts next year to run the plant 24 hours and maximize production. The company aims to lower the Turkish plant’s hours per vehicle (HPV) from 20 to less than 15 with its expansion next year.

“From April 1st next year, we will begin three shifts and we are about to hire an additional 550 people,” Shin said.

Unlike in Korea, where Hyundai gets headaches every year from its labor union, the Turkish plant has no union. Hyundai said that it closely communicates with headquarters to deal with labor issues in advance.

In Korea, factory workers were criticized for getting more money while trying to get reduced working hours. Some of Turkish employees heard about Hyundai’s labor problem in Korea, but at the moment, it isn’t likely that they will follow in the footsteps of the Korean workers.

“I’m very satisfied at working here because the company continues to grow and I feel proud that I contributed some part of it,” said Derda Kasal, who has worked on the assembly line of the plant since 2010.

Hyundai said that success of the Turkish plant will also help its Korean suppliers nearby. Currently, eight Korean suppliers, including Hyundai Motor Group affiliates Hyundai Mobis and Hyunday Hysco, have set up factories there.

The expansion of the plant and production of the new i10 was good news for the suppliers, too. Howon, which supplies automobile body parts, also expanded its facility recently, which is 15 minutes away from Hyundai’s plant.