Certification of artifact experts had loopholes

Certification of artifact experts had loopholes 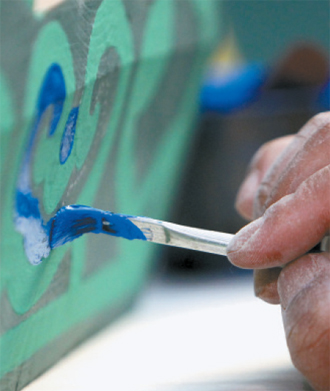 This file photo shows an expert in traditional coloring restoring Sungnyemun last February, four years after the gate was burned down in an arson attack. Criticisms are mounting that the gate was not restored properly and that Korea’s cultural properties are managed poorly. By Kim Do-hun

As criticism mounts over the slapdash restoration of Sungnyemun, Korea’s No. 1 National Treasure, Cultural Heritage Administration (CHA) officials have been certified as “cultural property repair specialists” through preferential treatment.

Some have even landed jobs after retirement at related organizations because they have the certification, a long criticized practice of government employees getting plum positions they don’t really deserve or aren’t qualified for.

President Park Geun-hye has called for an investigation into the situation and for punishment of anyone found responsible.

According to data obtained by the JoongAng Ilbo, between 1971 and 2009 a total of 57 CHA officials were awarded certificates saying they were cultural property repair specialists. Of them, 56 got certificates for “maintenance,” while one got a certificate for “dancheong,” the traditional coloring on Korean wooden structures. After retirement, more than half of them - 32 - landed jobs at construction or landscaping companies that work on cultural properties.

“Some of the CHA officials with the certificates opened their own companies [for cultural property repairs],” said an executive in the industry who didn’t want to be identified. “For companies, it’s good to have former CHA officials to win orders.”

Critics say the exemptions make it a piece of cake for CHA officials to become “specialists.” Hwang Pyeong-wu, a civic activist in the area of cultural properties and the head of the Korea Cultural Heritage Policy Research Institute, says “Korean architectural structures is a key subject area of the written test for the certificate of cultural property repair specialist.”

Kim Ho-seok, a professor at the Korea National University of Cultural Heritage, also points out: “It wouldn’t be easy for interviewers to give an F to CHA officials.”

Included among the CHA officials who hold the certificate are three current and former officials who led the restoration of Sungnyemun, also known as Namdaemun. They received their certificates between 1989 and 1995, when the written test was waived. They alleged that even if they were exempted from the written test, they consider themselves qualified enough as they were in the field of cultural property repairs for over 10 years.

The state-run CHA oversaw the five-year restoration of the 600-year-old gate made mostly of wood, which was the gateway to the capital during the Joseon Dynasty (1392-1910). However, the high-profile, costly restoration, which was completed in May of this year, is believed to have been a failure, as the gate is showing damage on its wood beams, paint and roof tiles already.

President Park, whose key policy interests include cultural enrichment, is also calling for a resolution.

“President Park Geun-hye has ordered a thorough investigation into the administration of cultural properties, including the issue of improper restoration of Sungnyemun, as well as punishment of those responsible,” Lee Jung-hyun, senior presidential secretary for public affairs, told reporters yesterday.

Lee added that Park views the issue as grave as corruption in the local nuclear power industry.

“The first step for cultural enrichment is preserving and handing down our culture well,” he said. “If there were problems in the restoration of Sungnyemun, as well as in maintenance of Seokguram Grotto [in Gyeongju], problems must be revealed and punishments must be delivered.”

“The president also believes the problems with certification of cultural property repair specialist are serious .?.?. and that measures must be improved,” Lee said.

Byun Young-sup, head of the CHA, said the administration is doing an internal investigation into the certification allegations. “The Board of Audit and Inspection is also about to start its own investigation,” she said.

One official at the BAI, however, suggested that its investigation will cover not just the certificates of cultural property repair specialist. “We have been collecting materials on the poor restoration of Sungnyemun for quite some time .?.?. We are conducting a preliminary investigation before we start our actual audit.”