DP walks out of all business but confirmations

DP walks out of all business but confirmations 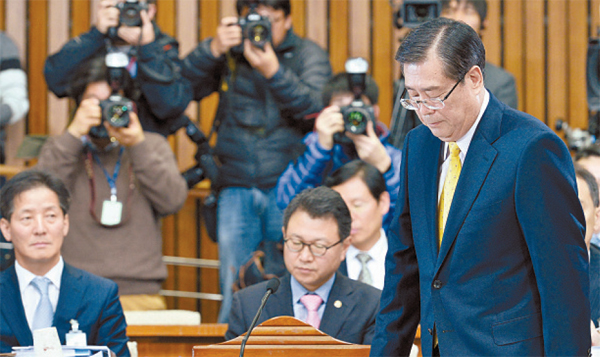 The opposition Democratic Party yesterday vowed to boycott all committee activities at the National Assembly until tomorrow with the exception of confirmation hearings for key government posts.

The opposition’s de facto political strike came a day after it wrapped up a three-month street protest at Seoul Plaza against President Park Geun-hye and the ruling Saenuri Party. The party was protesting government interference in last year’s presidential campaign and demanding reform of the National Intelligence Service.

“We have concluded that the prosecution’s selective investigation and punishment is part of a state-led maneuver to evade a fair investigation,” said Jun Byung-hun, floor leader of the DP, at a party executive meeting yesterday.

The opposition also urged the government to launch a special counsel probe into allegations that the government institution interfered in last year’s presidential campaign and start a special committee to overhaul the spy agency.

Leaders of the Saenuri Party attacked the DP for driving the National Assembly toward a “brain-dead” status. The DP riposted by saying, “Democracy is crumbling day by day.”

“The DP, while claiming democracy should be revived, came up with the card of a special prosecutor and stalled other bills including those on the budget,” said Hwang Woo-yea, chairman of the Saenuri Party.

Choi Kyung-hwan, floor leader of the Saenuri Party, also said: “Exploiting a special prosecutor to stir up political controversy will only expand divisions. The DP should not overlook what the country really wants [us to be doing].”

Choi cited Gallup survey results since July to support his idea. The surveys showed that over 30 percent of respondents think reviving the economy should be the top priority of the politicians.

Choi said the majority of the 55 bills proposed by the opposition are meant to restrict corporate activities, which will eventually make the livelihoods of ordinary citizens more difficult.

The hearing for Moon Hyung-pyo, nominated as minister of health and welfare, is scheduled today and another for prosecutor-general nominee Kim Jin-tae is scheduled for tomorrow.

DP floor leader Jun said the common link among the nominees is that their predecessors were victimized by the Blue House. Jun vowed to focus on assessing the “moral qualification” of the nominees.