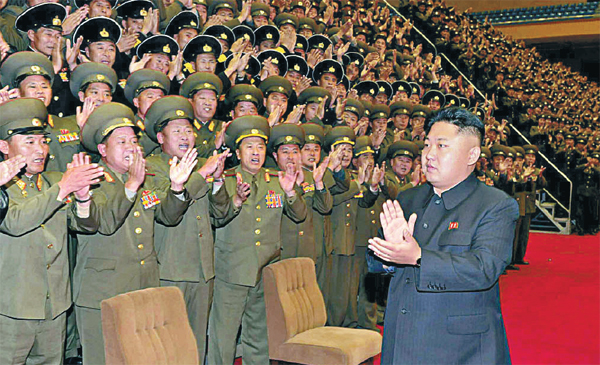 North Korean leader Kim Jong-un attends a meeting on Monday with members of the army’s psychological warfare unit, the fourth of its kind, which focused on preparing the military for an “enemy attack.” The event was covered in the North’s Rodong Sinmun newspaper on Tuesday. [Rodong Sinmun]

Members of the North Korean government’s psychological warfare unit gathered in Pyongyang on Monday for a meeting attended by North Korean leader Kim Jong-un that focused on preparing the military for an “enemy attack.”

According to experts, the psychological cyberwarfare unit has likely become one of the North’s top warfare tactics, following missiles and nuclear weapons, as Kim Jong-un places more priority on cyberwarfare.

At the group’s fourth meeting, Kim gave a pep talk on how the North would prepare for an enemy attack - namely from the South Korean Army. After a photo op, he told the men that they were “safeguarding socialism in rain or in snow, trustworthily protecting [the North] from the front lines [of enemy attack].”

Also in attendance were key military officials, including Choe Ryong-hae, head of the General Political Bureau of the North Korean People’s Army.

Rodong Sinmun, the official newspaper of the Workers’ Party, ran a photograph of the event on Tuesday, accompanied by a front-page article, highlighting the unit’s significance.

“Even though North Korea held this meeting for [allegedly] the fourth time, there were no records of the first three meetings,” a government source here said. The fact that the meeting was publicized in a national media outlet, observers say, likely indicates that the priority placed on the psychological cyberwarfare unit is growing, especially considering the secrecy previously surrounding it.

“What we can see from this [instance] .?.?. is that Kim Jong-un himself is supervising the psychological cyberwarfare against the South, and that indicates that [the unit] will become more conspicuous,” said Kim Yeon-su, a security policy professor at the Korea National Defense University.

Other analysts speculated that the North is showing more movement amid controversy in the South surrounding the interference of different government agencies in last year’s presidential elections, during which disparaging comments about opposition candidate Moon Jae-in were posted on Twitter and other social networking sites.

“Separate from this meeting,” a military official said, “there is the likelihood that there have been talks on strengthening the army’s psychological warfare against the South as well as bolstering the unit as a whole.”

During the 1990s, the psychological cyberwarfare unit spread propaganda via radio, the media and government loudspeakers, including messages encouraging South Koreans to defect to the North. The unit’s existence first became known in February 1998, after Byun Yong-kwan, a North Korean army officer, defected to the South through Panmunjom.

Later that month, First Lt. Kim Hoon was found shot dead at the demilitarized zone’s Joint Security Area. He died from a gunshot to the right temple in the truce village of Panmunjom. Before his death, Lt. Kim had been investigating secret contact between South Korean soldiers and North Koreans in the unit. The cause of his death remains unknown.

Following the 2004 inter-Korean summit, in which the North agreed to halt certain propaganda methods, it became more difficult for the unit’s activities to be traced. Until Monday’s meeting, this was largely the case.

Nam Jae-joon, director of the National Intelligence Service, confirmed that the North Korean army formed a psychological cyberwarfare unit with 1,700 people across seven hacking groups who are involved in spreading Internet propaganda via social networking services.