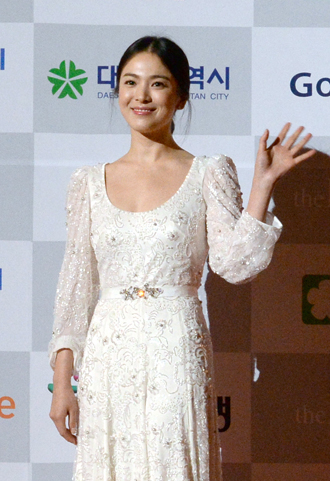 Actress Song Hye-kyo took home the top honor Saturday at the 2013 APAN Star Awards in Daejeon for her solid and realistic performance in “That Winter, the Wind Blows.”

In the drama series, which ended its run in April, Song played a cold-hearted heiress who loses her eyesight after being diagnosed with a tumor.

“I really appreciate those in the blind community who helped me [develop the character],” said Song, who showed up to the event wearing a white dress with beaded embroidery.

Additionally, the award for best actor of the year went to Lee Joon-gi for his role in “Two Weeks,” with best actress of the year going to Lee Bo-young for “My Daughter Seo Young.”

The annual award show is in its second year. Actor Son Hyun-joo was last year’s grand prize winner, taking home the award for his performance in “The Chaser.”