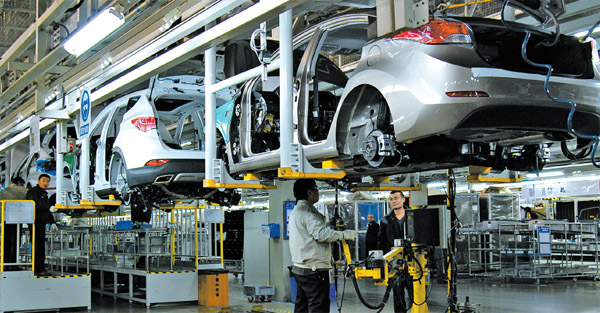 Workers assemble vehicles yesterday at Hyundai Motor’s plant in Beijing, which produces the midsize Mistra sedan and three other Hyundai models. The Mistra will go on sale tomorrow. Hyundai Motor, which is marking the 10th anniversary of its entry into the Chinese market, has increased its annual production capability there to 1 million units and 12 models.[NEWSIS]

SUPERIOR TOWNSHIP, Mich. - Hyundai Motor will launch new versions of its Sonata and Genesis sedans and a hydrogen-fueled Tucson crossover in the United States in the first half of 2014, the automaker’s top U.S. executive said Friday.

The Korea automaker is expected to unveil the Tucson fuel-cell vehicle, which is sold in Europe as the ix35, next week at the Los Angeles auto show, Hyundai Motor America Chief Executive John Krafcik told reporters at the company’s technical center outside Detroit.

Through 2016, Krafcik said, Hyundai plans to build 1,000 of the Tucson fuel-cell vehicles, which are made on the same Korean assembly line as the gasoline-powered model, but the company is prepared to build more if the demand is there.