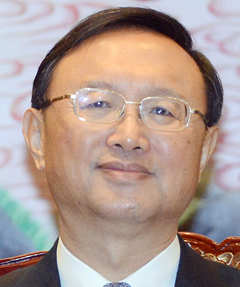 Chinese State Councilor Yang Jiechi yesterday met with President Park Geun-hye and affirmed that Korea and China have entered the next stage of development in bilateral relations. The two discussed issues including North Korea policy and a free trade agreement that is in the works.

Yang, with a Chinese delegation including Vice Minister of Commerce Gao Yan and Vice Minister of Foreign Affairs Liu Zhenmin, arrived in Seoul on Sunday for a three-day visit highlighted by the first high-level bilateral security talks between Yang and Kim Jang-soo, chief of the Blue House’s National Security Office yesterday.

Park is said to have expressed that North Korea has to show sincerity in denuclearizing, especially through steps such as taking a sincere approach to the reunions of families separated during the 1950-1953 Korean War, and by improving communications and transportation at the Kaesong Industrial Complex. Both Park and Yang agreed that Pyongyang choosing the right path would be fruitful to cooperation in Northeast Asia, said a Blue House official.

The visit was a follow-up to the Korea-China summit in June in which presidents Park Geun-hye and Xi Jinping agreed to set up various strategic dialogue channels, encouraging better communication among high-ranking diplomats and security officials.

“Through our joint effort, this visit has been very productive and proceeded well,” he said. “And thus, our bilateral relations have entered into a new development in relations.”

Park told Yang, “I believe your visit will play an important role in the situation on the Korean Peninsula and in our bilateral relations.” The bilateral security talks, she said, “are a good opportunity to strengthen the two countries’ trust and bonds.”

She also lauded the major reforms outlined from the third plenary session of the 18th Central Committee of the Communist Party of China in Beijing last week.

“President Park especially is looking to emphasize maximization of the hidden potential in bilateral cooperation through next-stage negotiation in regards to the Korea-China free trade agreement, the security talks between Yang and Kim and the launching of the humanities cooperation committee,” the official said.

The start of the second stage of negotiations on a bilateral trade agreement commenced yesterday in Songdo, Incheon.

Yang, who served as China’s minister of foreign affairs from 2007-13 and ambassador to Washington from 2000-4, also met with Foreign Minister Yun Byung-se, with whom he discussed North Korea. He is scheduled to attend the launching of the Korea-China joint committee on humanities exchange today and visit Samsung Electronics facilities in Suwon.

Yang had a long relationship with former North Korean leader Kim Jong-il, having met him in Pyongyang in June 2007 and in May 2011 when Kim last visited Beijing. He represented China in North Korea later that year at Kim’s funeral.

A resumption of the six-party talks among China, Japan, Russia, the U.S. and the Koreas is gaining momentum as the U.S. Department of State said Glyn Davies will travel to Beijing, Seoul and Tokyo from today for one week.

In his two-day Seoul visit from Friday, Davies is expected to meet with Cho Tae-yong, special representative for Korean Peninsula peace and security affairs.