Korea comes up short vs. Russia

Korea comes up short vs. Russia 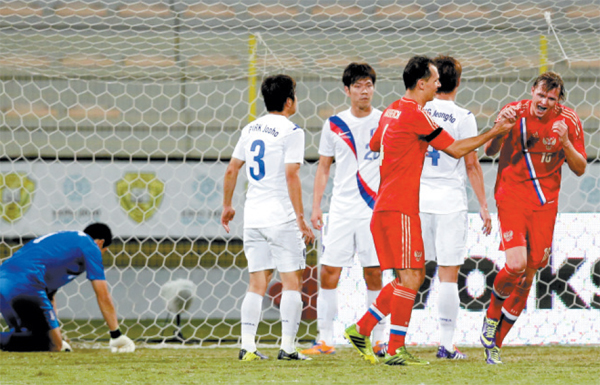 Members of the Korean national football team are despondent after allowing a goal by Dmitri Tarasov, right, during a friendly match against Russia that was held on Tuesday in Dubai. [AP/NEWSIS]

In the friendly held in Dubai that kicked off at 11 p.m. on Tuesday, Korea time, the Taegeuk Warriors were overpowered. The good news is that they were able to utilize the combination of Kim and Lee, who started the match as the central attacking midfielder. However, goalkeeper Jung Sung-ryong performed poorly and failed to rebound from a recent slump.

Coach Hong Myung-bo, who was aiming to win three straight A-matches, including a 2-1 victory over world No. 7 Switzerland, made some changes to the lineup he used versus the Swiss team.

Though it was an away match with less fan support, the Taegeuk Warriors appeared confident. They passed smoothly and aggressively pressured in the midfield areas.

It didn’t take that long to score the first goal. Kim Shin-wook, who is 197 centimeters (6 feet, 4 inches) tall, scored in the sixth minute as a Russian defender failed to clear Korean midfielder Ki Sung-yueng’s cross in a corner-kick situation. It was Kim’s first A-match goal in 530 days.

But that lead didn’t last long. When Russian midfielder Roman Shirokov made a ground ball cross from the right side of the penalty box, which looked like it wasn’t hard to put away, the ball passed through the goalie’s armpit as he failed to put it away, letting Fyodor Smolov score the tying goal in the 13th minute.

It wasn’t only Jung’s fault, because the four defenders failed to prevent their opponents from penetrating into the goal area by breaking the offside trap with three clean through-passes.

But the Taegeuk Warriors still dominated the first half. The former Ulsan Hyundai duo of Lee Keun-ho and Kim Shin-wook produced several scoring chances in the 17th and 18th minutes. Each time Kim had a header near the penalty box, Lee penetrated close to where the ball was and blasted shots on target. Ki also tried to score with his strong mid-range shots.

After the first half, Hong replaced the tall striker with Nam Tae-hee, placing him in Lee Keun-ho’s center midfielder position, while Lee moved to the top of the offensive line.

But the move failed to produce results. Nam struggled due to the opponents’ strong pressure and the team’s ace player, Lee Chung-yong of the Bolton Wanderers, looked like he was tired.

Korea then allowed Russia’s second goal in a corner kick situation in the 59th minute. Defenders failed to catch Dmitri Tarasov, who put the header into Korea’s net.

Korea had a better game statistically but couldn’t win. It took 12 shots, compared to Russia’s six, and six of Korea’s 12 shots were on target compared to the Russians’ three. Korea also had eight corner kicks, while Russia only had two.

“I don’t worry about the game score because I wanted to experiment with many things in this game,” coach Hong said. “I think Shin-wook showed what he has on the field and I expect goalkeeper Sung-ryong to bounce back and regain his confidence.”

“I really don’t know what is going on,” Jung said, regarding his recent performances. “I think I have prepared well for most of the games, but sometimes things just don’t work out.”

Since June, Hong’s national team has had 10 A-matches and earned three wins, three draws and four losses. The match against Russia was Hong’s first away game.

After the World Cup draws, which are scheduled at 1 a.m. on Dec. 7, Korea time, the Taegeuk Warriors will have about two weeks of training from mid-January to early February in Brazil and in the United States. The Korea Football Association is projecting to have three more A-matches before June, the month the Brazil World Cup kicks off.