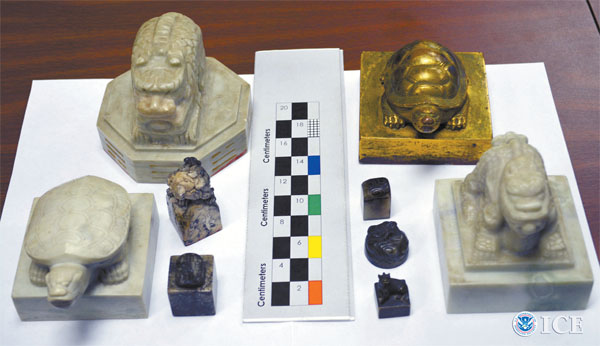 Nine seals from the Korean Empire (1897-1910) and Joseon Dynasty (1392-1910) have been seized by the U.S. The artifacts, stolen from Korea during the 1950-53 Korean War, include two national seals from the empire (far left, top row and far right, bottom row). Provided by the Cultural Heritage Administration

Nine royal seals spirited out of Korea by an American soldier during the 1950-53 Korean War will be returned next year, Korea’s Cultural Heritage Administration (CHA) said yesterday.

Agents from the U.S. Immigration and Customs Enforcement’s Homeland Security Investigations (HSI) directorate seized the artifacts on Nov. 18 from the family of a deceased Marine lieutenant who served in the Korean War, Seoul’s cultural heritage authority said in a statement.

Apparently the soldier found the seals in a ditch near Deoksugung Palace in Seoul in 1950 after it was ransacked by Chinese and North Korean soldiers.

The seals, stamps used to authorize documents in lieu of signatures, are from the Joseon Dynasty (1392-1910) and the Korean Empire.

The Korean Empire, sometimes called the Daehan Empire, refers to the final years of the Joseon Dynasty, from 1897-1910, when the state transformed itself into an empire in an attempt to ward off Japanese encroachment.

The U.S. Immigration and Customs Enforcement agency said on its website that its HSI agents got information in September from a Washington, D.C.-based antiquities expert that a man residing in Escondido, California, had gotten in touch to find out the value of the seals.

The antiquities expert forwarded photographs of the seals to HSI, which sent them to the CHA. The CHA determined that the seals were indeed from Korea’s dynasty and empire.

Since then the CHA, the Supreme Prosecutors’ Office (SPO) of Korea, HSI San Diego and HSI Seoul have been working together on the case.

“[The seals] are worth millions in the antiquities business, but they are priceless to South Korea,” said HSI’s attache in Seoul, Taekuk Cho. “The seizure is a direct result of international cooperation and sends a clear message to individuals trying to profit from illicit cultural property in the U.S.”

According to the CHA, the nine seals include two national seals from the Korean Empire, whose year of manufacture are known, two royal seals from the Joseon Dynasty and five signets of Joseon.

The national seals are the Hwangjejibo (Seal of Emperor), a national seal made upon the establishment of the Korean Empire in 1897 and the Sugangtaehwangjebo (Royal Seal of ex-Emperor Sugang), a royal seal carved to commemorate a 1907 royal ritual.

“In particular, Hwangjejibo has historical significance in that it was made to commemorate the founding of the new empire and thereby convey Emperor Gojong’s determination for national sovereignty,” said Nam Sang-beom of the CHA’s international cooperation division.

“National and royal seals of the Korean Empire and Joseon Dynasty are not something that should be traded among individuals through private routes,” Nam said. “They embody the state’s dignity and the people’s pride and thus are cultural properties that must be returned.”