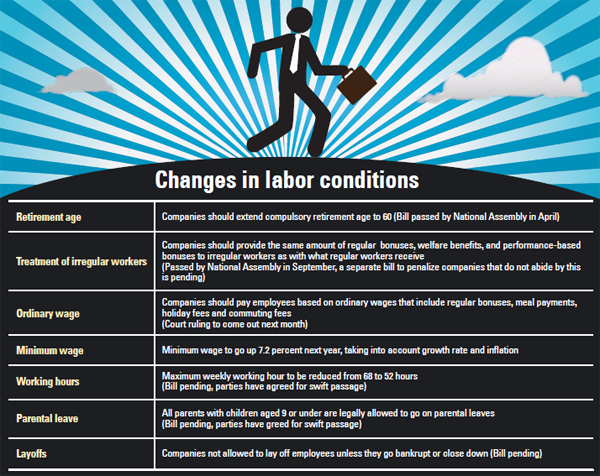 Mr. Kim is looking forward to the new year.

The 33-year-old banker is paid an annual salary of about 53 million won ($50,000), but that could change in 2014 depending on a full-member ruling by the Supreme Court next month.

Right now it’s likely that the chief justices will rule in favor of the new proposals, including employee bonuses, commuting expenses and vacation fees in regular wages.

For Kim, who makes an ordinary wage of 24.5 million won - which includes basic pay and meal expenses - a favorable decision by the court would mean that amount would increase to 26.9 million won. 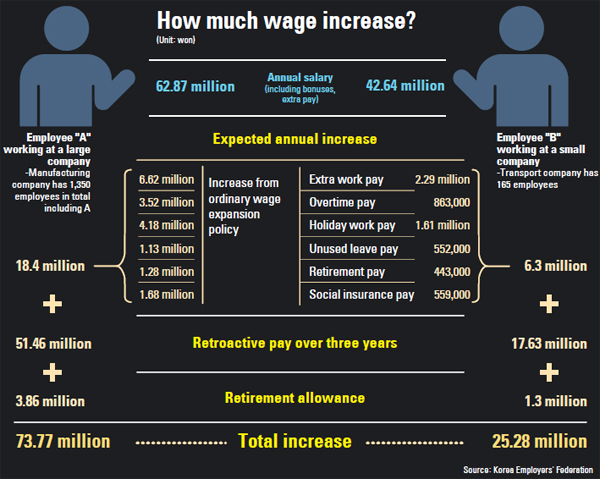 An increase in the amount of ordinary wages would increase how much employees make in a year, as over-time, severance and retirement payments are calculated based on ordinary wages.

But that’s just one of about 180 proposals awaiting confirmation from the National Assembly that could drastically change working conditions for Korean employees.

Twelve bills have already been passed, including a law extending the retirement age.

The bills are mostly aimed at expanding employment based on market conditions as well as actively implementing regulations that reduce working hours, among other things.

Taking into account all of the proposals circulating in the Assembly, the changes Kim may see in his working life are significant.

For instance, he could very well get more days off next year based on a holiday substitution law that will take effect in 2014.

The mandate states that if a national holiday overlaps with a weekend, then employees are allowed to take their holiday at another time.

Lawmakers are also discussing the possibility of expanding annual paid leave time. So Kim, who has one child, could be guaranteed up to 50 days of paid leave - twice the current allowance.

The National Assembly is also considering various bills for working parents, including a proposal that would allow employees with children to take up to 21 days of leave.

Pregnant women carrying twins could get to take up to 150 days of maternity leave, a significant increase from 90, and new fathers could get 30.

Starting next year, employers will be required to provide the same amount of pay and welfare benefits to part-time workers as regular employees based on a revision in September of a related law.

Korea’s labor industry has positively transformed since the Labor Standards Act was introduced in May 1953, and the number of current proposals relating to working conditions shows that big changes are afoot once again. But the difference is that these moves were largely anticipated.

During last year’s presidential campaign, Park Geun-hye - then the Saenuri Party candidate - and her rival, Democratic candidate Moon Jae-in, had similar views on the future of the country’s labor and employment market.

Both argued in debates that companies shouldn’t be left to voluntarily and flexibly expand their hiring based on market conditions, adding that it was up to the government to impose regulations to boost employment.

Currently, minimum wage is 37 percent of the average wage.

Park detailed her plan for the labor market, promising that by 2020, employees would only be required to work 35 hours per week - or 1,800 hours per year - while Moon promised working hours would be reduced to 2,000 hours per year within five years.

“When it comes to bills related to the labor market, both the ruling and opposition parties are headed in the same direction,” said Saenuri Representative Lee Jong-hoon. “But the reason why progress is slow is because there is conflict between the two over other issues, like the alleged election-rigging scandal involving the National Intelligence Service.”

Still, the passage of these bills is just a matter of time, and companies are aware of the changes ahead.

“We have taken into fact that there will be big changes in the labor market and are worried about what measures we’re able to take to minimize losses [from an employers’ perspective],” said a senior official at a large company.

“Companies are concerned and are wondering how they will maintain competitiveness and survive the changes in the labor market,” Kim said. “Companies will have to approach the issue carefully after reviewing the opinions of both the management and the unions.”

Professor Kim Tae-ki from Dankook University said companies will need to find ways to raise productivity despite an increase in employee benefits.

“The labor policies that are in discussion now are inevitable to ease social polarization,” he said. “The task for companies will be to find ways to raise productivity despite changes.”

For employees, the implementation of the new laws will have various effects, depending on if they work for a large or midsize company.

One 34-year-old - who will go by Mr. A - works for a large company in the production department.

It has been more than three years since he joined the company, and he receives 62.87 million won in annual salary.

Of the total amount he earns, 17.6 million won is included as overtime and holiday pay, and the amount varies every year depending on his work flow.

The 17.67 million won he receives is actually higher than the fixed pay he receives at 13.98 million won. On many occasions, he has volunteered to work on holidays and weekends.

When applying the new law that expands ordinary wage, there will be a noticeable jump in the amount of annual salary Mr. A receives as regular bonuses and holiday payments will be included in the ordinary wage, which currently stands at 15.96 million won.

This amount is expected to increase 87.5 percent to 29.93 million won.

When adding up overtime and extended work payments, his annual salary will be more than 80 million won, up from the current 62.87 million won.

“We are panicking,” said a human resources representative from Mr. A’s company. “It is difficult for us to calculate how much more each employee will receive when these changes take effect.”

On the other hand, employees working for small- and medium-size enterprises (SMEs) aren’t projected to receive as many benefits as someone like Mr. A, who works for a large company.

Another employee, 31 - who will go by Mr. B - currently works for a small transportation company that has 165 employees. He’s in his third year on the job and receives 42.64 million won in annual salary.

Even when applying the changes of the ordinary wage law, Mr. B will only receive an additional 6.3 million won - 34.4 percent of what Mr. A will make - because he earns little from work-related expenses.

But regardless, the change is likely to be a burden for many SMEs.

“With the expansion in ordinary wages and an increase in the minimum wage, SMEs are worried that they will have to reduce the number of new hires, leading to a loss in production,” said Kim Ki-moon, chairman of the Korea Federation of Small and Medium Businesses.

“They’re worried that the quality of employment will worsen.”