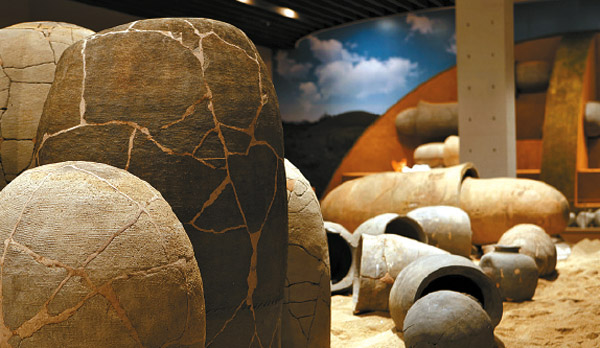 Re-creations of earthen coffins that have been found in the Jeolla region. Such coffins were part of the burial culture of the Mahan confederacy, which existed from the first century B.C. to the third century. Provided by the museum

Naju Museum, the only national museum in the Jeolla region, opened last week to high anticipation from the region.

Nestled in Mount Jami in Naju, South Jeolla, amid the mysterious-looking ancient tombs from the Three Kingdoms era (57 B.C.-A.D. 668), and about a 20-minute drive from the downtown area, the two-story museum is hoping that visitors will love its natural setting and the quietness it has to offer.

“Our concept is slowness and healing,” Park Jung-hwan, the museum’s director, said. “We hope people would let go of their urban lives, where things move fast, and enjoy their time amid the ancient tombs, created about 1,500 years ago.”

The National Museum of Korea said the Naju Museum will specialize in the Mahan confederacy, a confederacy of statelets that existed from around the first century B.C. to the third century in the southern end of the Korean Peninsula, alongside the more famous Three Kingdoms of Goguryeo, Silla and Baekje.

At the opening exhibition, titled “Naju, 1,000-Year Moksagol,” some 1,500 relics will be on display. They include some of the museum’s star artifacts, like a glittering golden crown uncovered from one of the tombs in Sinchon-ni, which is National Treasure No. 295, as well as one of the documents about Japanese invasions, known as the Imjin War (1592-98), National Treasure No. 660.

One of the most notable features of this museum is that it will open its storage to the public. Through the glass, visitors can get a glimpse into the artifacts. Although it is seeking “slowness” and “healing,” the museum is also seeking to be high tech. By installing the near field communication (NFC) technology throughout its facilities, people can learn about the relics through their smartphones.