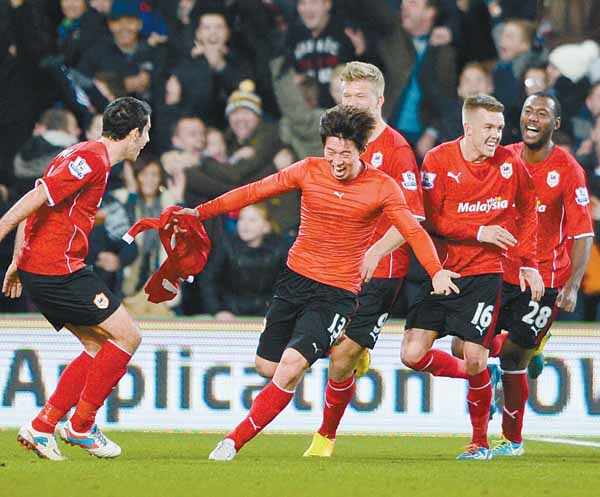 The 24-year-old Kim only played the last 15 minutes of the game, but that was enough time for him to impact the game. Kim appeared on the field in the 75th minute, when the team was trailing the 2012-13 season champions, and scored the game-tying goal with a header in a free kick situation in the 90th minute. Peter Whittingham delivered a cross from the left outside of the penalty box and Kim connected the pass into a header over United’s Wayne Rooney and defender Rio Ferdinand.

After scoring the goal, Kim took off his No. 13 jersey and galloped across the field with his teammates, who jumped on him to congratulate his EPL debut goal. Cardiff City avoided falling into a two-game losing streak and United lost its chance to become one of the league’s top four teams.

“I have been worried recently because I had not scored a goal,” Kim said in an interview with Korean media after the match. “I’m very happy not only because I scored a goal but also because I scored against a contender team like United. I think I will get better in later games. Because I had to join the Korean national football team earlier this week, I was physically tired, but staying with Korean players always makes me better mentally as I can share many things with other Korean European league players.”

It wasn’t fun for United fans, who had to see an Asian player who looks a lot like their former Korean star, Park Ji-sung, who also wore No. 13 for United, blowing away their victory.

The official website of the Manchester United said, “The successor of Park Ji-sung snatched a draw for Cardiff City.” Park previously told U.K. media several times that Kim will be his successor. But Kim had a hard time getting chances to start a match as he failed to impress the team’s manager, Malky Mackay.

Kim was considered one of Cardiff City’s key players in the beginning of the season after successfully adapting to the U.K.’s Championship League with two goals and three assists, but was scoreless since then, forcing Mackay to start Kim’s rivals, such as Jordan Mutch. Kim also couldn’t impress Hong Myung-bo, coach of the Korean national football team, in several matches, including those against Switzerland and Russia earlier this month.

United was looking to climb into the top four for the first time since August, but could have been playing with 10 men for most of the game at Cardiff after Rooney hacked at Mutch’s calf as they chased down a ball on the left wing in the eighth minute. Rooney received only a yellow card and scored seven minutes later when his deflected shot looped into the corner.

Fraizer Campbell equalized, but Patrice Evra’s header on the stroke of halftime looked like it would get United a win until Kim’s intervention in the second minute of stoppage time.

“I’m disappointed we didn’t take three points,” said United Manager David Moyes. “Cardiff made a game of it and put us under pressure. We gave away a silly free kick which led to their second goal and didn’t defend it well enough.”

“It is impossible to play better than we did today,” said City Manager Manuel Pellegrini, whose side has scored 26 goals in six straight home wins this campaign.

City, which was 5-0 ahead after 56 minutes and has now scored 18 goals in its last three home games, stayed six points behind leader Arsenal and just needs to sort out its dreadful away form.