Korea completed the construction of the Ieodo Ocean Research Station on a submerged rock in June 2003 south of Mara Island. [NEWSIS]

“We regret that China’s Air Defense Identification Zone overlaps with ours,” said Kim Min-seok, the spokesman of the Defense Ministry, “and we will negotiate with the Chinese so that this measure does not impact our sovereignty.” 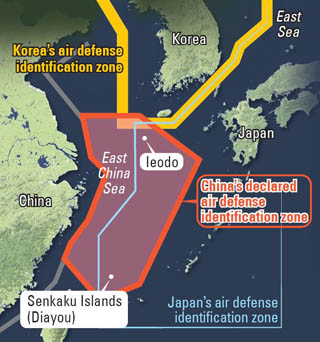 Kim added that Korea continues to have territorial control over Ieodo.

The ministry has also lodged a formal complaint with the Chinese Embassy in Seoul, stating it can’t accept the unilateral decision to establish the air defense zone.

Chinese Foreign Ministry spokesman Qin Gang responded at a briefing yesterday saying that he hopes China and Korea, as “friendly, neighboring countries, can solve the issue through dialogue and communication, and keep peace and security.”

Qin added: “Ieodo is a rock submerged under water and so it is not considered disputed territory.”

China issued a map Saturday establishing an air defense identification zone over parts of the East China Sea, which it said was effective immediately. The demarcation drew immense protests from countries including Japan and the United States.

The Japanese Foreign Ministry on Sunday slammed the air defense identification zone, saying it was “unacceptable.” The zone covers the Senkaku Islands, which the two countries have each claimed as their own. China, which calls them Diaoyu, said it would take defensive emergency measures against unidentified aircraft that entered its air defense zone.

“The measures by the Chinese have no validity whatsoever on Japan,” Abe said during an upper house session, in which he demanded that China “revoke any measures that could infringe upon the freedom of flight in international airspace.”

“Escalatory action will only increase tensions in the region and create risks of an incident,” Kerry said in a statement released Saturday.

Hagel, likewise, called the move a “destabilizing attempt to alter the status quo in the region.”

The Chinese Ministry of National Defense responded that Japan’s remarks were “absolutely groundless and unacceptable,” defending the zone as “a necessary measure China has taken to exercise its right to self-defense,” which is not directed at any country. The Chinese Foreign Ministry further said that it has lodged a complaint with the U.S. about its “irresponsible remarks” regarding the zone.

While Beijing-Seoul relations have been at its highest since diplomatic relations were established in 1992, the dispute over this region, which lies in an overlapping part of the two countries’ respective exclusive economic zone (EEZs), remains unresolved.

As part of efforts to strengthen its jurisdictional control over the islet, Korea in 2003 built an unmanned maritime research station on Ieodo to monitor weather conditions, despite protests from China. Both the ruling and opposition parties in Korea expressed concerns that the designation of the air defense zone would contribute to military tensions in the region.

“The Defense Ministry said that this designation of zones [by China] will not impact our waters around Ieodo,” Saenuri Party spokesman Yoo Il-ho said in a statement yesterday, “but our related officials will have to talk closely with China to make sure that this measure will not infringe upon our sovereignty.”

“Our related officials will have to closely monitor the development of events, holding firm in our stance that we do not accept China’s unilateral proclamation of an air defense identification zone,” he continued. “[We must] firmly deal with any activities that may add to instability in the Korean Peninsula and the Northeast Asia region, and try to ease military tensions by building mutual trust among nations in the region.”

Kim Kwan-young, chief spokesman of the Democratic Party, warned yesterday at a briefing that as territorial disputes grow fiercer, there is a greater risk that military clashes may occur.“President Park [Geun-hye] visited China and made headlines for being welcomed as a state guest by President Xi Jinping,” Kim said. “But utilitarian diplomacy has disappeared into thin air. Even more important than receiving applause for a speech in China is the need to deal sensitively with pending issues between China and Korea.”