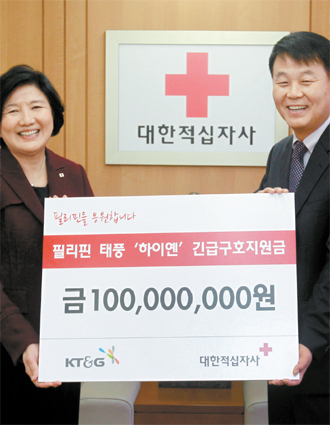 The tobacco and ginseng company has joined other Korean businesses in sending financial support to victims of typhoon Haiyan in the Philippines. The donation will be used for the relief effort in areas wrecked by the typhoon that took killed at least 5,500 persons earlier this month.

“It is an opportunity for Korea to repay the debt we owe after 7,000 troops from the Philippines were sent to participate in the Korean War,” said a KT&G official. “We hope that the Filipinos who were affected by the worst typhoon in history can find hope in a quick recovery.”

KT&G has been increasing its support to disaster areas, including the 2011 earthquake in Japan and in China earlier this year. The Korean company has also been active in overseas efforts such as medical volunteer work in Indonesia and it has a volunteer program in Cambodia. Provided by the company