Starting next year, collision insurance payments for most foreign cars will be raised, while many domestic cars will see a reduction, as the Korea Insurance Development Institute (KIDI) has developed a plan to revise the collision coverage rate classification system.

The nonprofit organization for the insurance industry on Wednesday announced that the number of ratings for collision coverage, which pays for damage that drivers cause to their own vehicles, will be broadened from 21 to 26 starting next year. In addition, insurance surcharge rates ? the amount insurance payments go up after major accidents ? will increase from 150 percent to 200 percent.

Collision coverage accounts for 24 percent of total auto insurance payouts, according to the KIDI.

These changes to collision payments follow criticism that those who drive imported cars usually have higher repair costs, but pay lower insurance fees, in effect discriminating against people who drive domestic cars and making accidents with foreign cars more expensive. 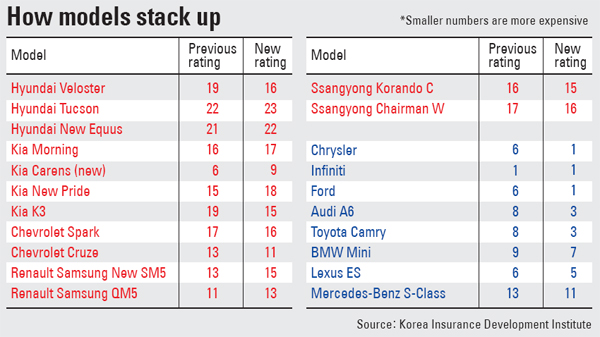 The number of imported cars has been growing sharply. According to data from the Korea Automobile Importers and Distributors Association, 130,239 new foreign cars were sold in the first 10 months of the year, a 20.9 percent increase from a year ago.

With the increase in foreign vehicles, insurance claims for foreign makes have also gone up, rising 827 billion won ($779 million) last year, according to KIDI, a 42 percent gain from 2010. Because the large number of insurance claims coming from foreign car accidents has put pressure on insurance companies, there were concerns that insurance fees in general could face a hike.

Instead, the KIDI’s revised plan will create five new high-end ratings categories, which will be applied to 206 models of cars (95 of the 304 models of cars sold in Korea have been excluded because they have not been produced for at least 10 years).

The new ratings are based on a model’s “damageability,“ which accounts for the amount of damage a car model suffers in accidents and how much replacement parts cost, and “repairability,” which assesses whether a car’s parts are easily replaceable and fixable. The current rating system took effect in April 2007 and looks at accident history and damage claims from insurance firms.

The new plan is aimed at raising insurance fees for expensive cars. Unlike the old system, which classified imports by automaker, the new system concentrates on individual brands. In addition, any foreign model that sells more than 10,000 units in Korea will be considered separately.

Among the 34 foreign models registered in Korea, only two models ? Land Rover and Porsche ? will not face rating hikes.

“Through this system revision, we expect the fairness among insurance holders to be enhanced,” said Kim Sung-ho automobile insurance service director at KIDI.