Young job-seekers look at notices during a youth job fair held early this month at a gymnasium in Gangneung, Gangwon. According to the Statistics Korea yesterday, the number of workers in their 20s dropped 2.6 percent last year from a year earlier. [NEWSIS]

Miss Jung is a 26-year-old college graduate, upbeat and full of positive energy. But one topic that can turn her glum is the job market.

“I’m interested in convention planning, but it isn’t easy finding a decent job in the industry,” says Jung, who graduated more than five months ago and is still unemployed.

Jung has submitted more than 10 applications, including for internships, but to no avail. She plans to submit more in December.

“It seems to me that with the aging society, there are many mature people in the job market, which is good. But at the same time, they are basically taking away our jobs, especially since there are very few job openings out there.” 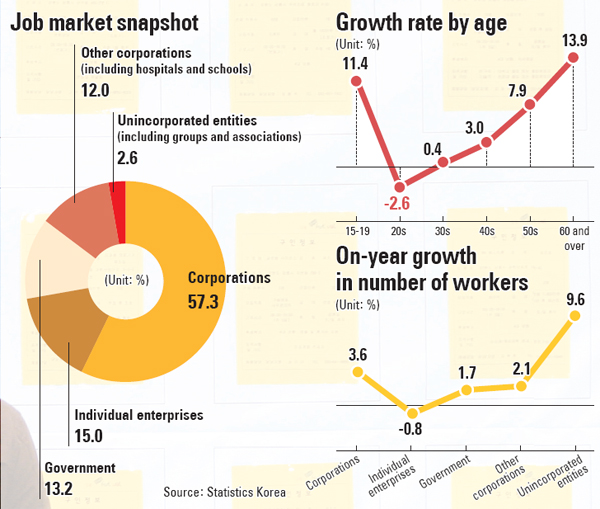 Jung is a testament to how young Koreans struggle to land jobs.

According to Statistics Korea yesterday, the total number of paid workers in Korea as of late 2012 was 15.9 million, up 2.6 percent or 408,000 from the previous year.

That sounds like pretty good news, but it depends on what age you are.

The bad news: The number of paid workers in their 20s dropped 2.6 percent from the previous year.

The figures announced by the statistics agency yesterday are different from its monthly employment trend figures in that they only include paid jobs that cover for all four major social insurances - the national pension, health insurance, employment insurance and workers’ compensation insurance. Monthly figures include jobs that don’t cover insurance, so they tend to be higher.

“In recent years we have seen a trend where there is an increasing number of employees in their 50s and 60s in the work force while fewer people in their 20s, and the figures support that,” said an official from Statistics Korea. “They include baby boomers [men and women born between 1955 and 1965] and mature people who are already retired but are rejoining the workplace as they feel the need to work longer to prepare for longer lives.”

According to 2012 data by the Organization for Economic Cooperation and Development, Koreans’ life expectancy is 81 years, one year higher than the average of other OECD countries.

As people live longer in Korea, there are concerns about its relatively young retirement age, and there have been efforts from the private and public sectors to re-hire retired people at lower pay levels.

The portion of workers in their 20s was 19 percent.

By gender, 62.3 percent were men and the rest women.