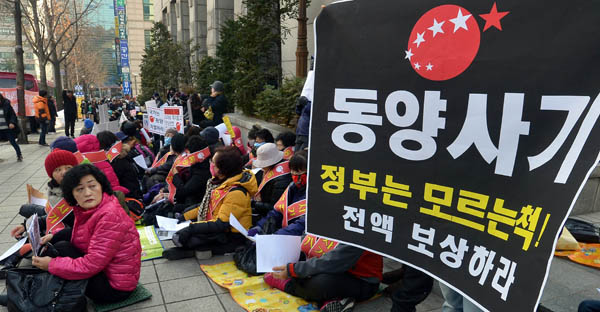 Members of the Council for Tongyang Group Victims hold a rally in front of the Seoul Central District Court in Seocho-dong, southern Seoul, on Saturday, calling for the government to investigate the debt-ridden conglomerate, which issued bonds and IOUs to investors while it was collapsing. [NEWSIS]

The chairman of debt-ridden Tongyang Group, Hyun Jae-hyun, and his wife, Vice Chairwoman Lee Hye-kyung, took remuneration of 4.5 billion won ($4.3 million) as their empire was tanking, leading to losses for around 50,000 investors.

The Tongyang Group debacle surfaced in late September when the conglomerate failed to secure enough liquidity to pay back its due debts and filed for court receivership for five affiliates.

The move left almost 50,000 individuals, who invested in the corporate bonds and commercial paper of Tongyang Group affiliates through Tongyang Securities, at risk of losing a total of more than 2 trillion won.?

The brokerage firm sold investments to retail investors without providing sufficient information about the risks involved in the high-interest bonds, and some malpractice is known to have taken place in the sales process.

Vice Chairwoman Lee has been criticized for secretly withdrawing 600 million won in cash from the accounts of Tongyang Securities and taking valuables from a safe deposit box.

Nevertheless, Hyun testified at the National Assembly on Nov. 18 that he had little wealth.

“It is a very difficult situation as I have put all my property in the management of the company that is now in court receivership,” Hyun said.

Meanwhile, another employee of Tongyang Securities committed suicide last Friday, leaving a note saying his clients’ losses made him feel guilty. The employee of the company’s Incheon branch was found dead in his car.

On Oct. 2, a 42-year-old employee at the company’s Jeju branch committed suicide for the same reason.

The police are investigating the employee’s family’s assertion that he was being sued by his former clients.

On an Internet bulletin board run by investors in Tongyang subsidiaries, people expressed sympathy for the suicide victim and instructed other Tongyang Group employees to not commit suicide but to blow the whistle on their company.

According to the Korean conglomerate research firm Chaebul.com, among the 219 companies that paid executive directors more than 500 million won in annual salary last year has shrunk to 123 as of September this year.