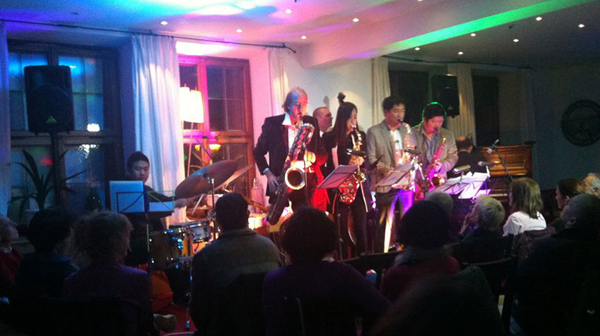 Jazz band “Supersax Korea” performs at the Musiksalon Diessen on Nov. 28 in Grafing bei Munchen. Photo from the festival’s website

In hopes of showing Germans that there’s more to Korea’s music scene than K-pop - which swept across Europe two years ago - the Korean Cultural Center based in Berlin has prepared a special event to “introduce the attractions of Korean jazz in full scale,” just in time to celebrate the 130th anniversary of relations between Korea and Germany.

As the first of its kind in Germany, the “JazzKorea Festival” kicked off on Nov. 28 and will run until Sunday in nine cities in the western European country. Seven Korean jazz bands were invited to tour nine German cities, including Berlin, Frankfurt and Munich. Along with the bands, 14 jazz musicians from Korea and 17 from Germany and other parts of the world will take part in the festival, performing in different venues.

However, it wasn’t a Korean jazz musician or the Korean Cultural Center in Berlin that came up with this idea first. It was German jazz bassist Martin Zenker, who spent four years in Korea teaching jazz and contrabass at Kyung Hee University as a guest professor.

According to the Korean Cultural Center, Zenker was “fascinated by the magnetism of Korean jazz and underground culture,” and when he returned to Germany he met German jazz journalist Nabil Atassi, who was also interested in Korean jazz. Together, they made a plan to introduce Korean jazz in Germany.

“When preparing last year’s performance, the idea came up to organize a Korean jazz festival together with the Korean Cultural Center. I am happy that I can finally show German audiences that there is such a vibrant jazz scene in Korea,” said Zenker.

Yun Jong-seok, director of the Korean Cultural Center in Germany, said, “Against the background of this year’s JazzKorea Festival, I expect that the jazz exchange between Korea and Germany will get a serious impetus. In order to keep up this impetus on a long-term basis, I have plans to organize the ‘JazzKorea Festival’ in the future on a yearly basis.”