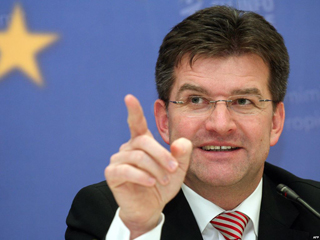 South Korea and Slovakia have much to celebrate. The two countries, perhaps an odd couple at first thought, have made massive strides in economic cooperation in the past 20 years.

Korea has become Slovakia’s No. 1 partner in Asia when it comes to trade and investment, Foreign Minister Miroslav Lajcak, Slovakia’s deputy prime minister, affirmed on a visit to Seoul last week. This is the first time in 12 years that a Slovak foreign minister has come to Korea.

“Our bilateral relations have witnessed a speculator increase and development in all the areas,” he added as he sat down for an interview with the Korea JoongAng Daily on Nov. 25 at the Hyatt Hotel in central Seoul. “Your side has also witnessed in the last 12 years a dramatic growth in Korea’s role as a global economic player and global investor. All these elements are conducive to the progress of relationships.”

This year is significant in many ways for the two nations. It marks two decades of bilateral ties, and it is also the 20th anniversary of Slovakia’s independence following its split from the former Czechoslovakia.

In that time, Korea has moved up to become Slovakia’s No. 6 partner in imports and No. 4 in exports.

More than 90 Korean companies employing more than 10,000 people are currently registered there - including Samsung and Kia - and have invested more than 2 billion euros ($2.7 trillion).

Earlier that day, Lajcak met with Korean Foreign Minister Yun Byung-se and signed an intergovernmental agreement on scientific and technological cooperation and a memorandum of understanding between the two foreign ministries, which provides a framework for bilateral cooperation and consultations.

“From an economic perspective, we spoke on how we want to see future cooperation and agreed to bring more value-added elements, namely research and development, scientific cooperation, cooperation between your industries and our universities,” Lajcak said.

“Your Korean companies are well known global leaders in research and development,” he added, “and we talked about greater involvement with our universities and research centers so your companies can benefit from our accomplishments.”

“Thanks to hard work and reforms, we became very competitive,” he continued. “We recorded highest GDP growth in the [European Union] in these 10 years - 4.7 percent on average annually.”

Lajcak said that when the global financial crisis hit Europe in 2008, Slovakia was not initially affected because of a reformed banking sector, stable public finances and a guaranteed conservative fiscal policy.

“But obviously we are so integrated in the European Union, we were affected secondarily. As an export-oriented country, up to 90 percent of Slovakia’s GDP is generated through exports and 85 percent of our exports go to EU markets.

“So one lesson we’ve learned is the greater need for diversification. Such one-sided dependence on European markets cause vulnerability, and that is ones of the reasons why we would like to see even greater cooperation with countries like yours.”

He added, “The massive economic presence of your companies creates new dimensions of our contact .?.?. There is quite a powerful Korean community in Slovakia. Now we offer television Korean channels. You have a Korean corner in every major food store in Slovakia.”

The two countries, he said, had a total trade volume exceeding 5.6 billion euros in 2012. Korea, as Slovakia’s fourth-largest export market, trails just behind Germany, the U.K. and the Netherlands. Asia accounted for nearly 30 percent of EU imports and more than 21 percent of its exports in 2012.

Earlier that same day, Lajcak gave a speech to students at the Hankuk University of Foreign Studies touching on forging a stronger Europe-Asia partnership. He also participated in the opening a new honorary Slovak consulate in Busan.

Lajcak acknowledged that reaching out to students has always been an important aspect of his overseas trips. This was his first time speaking at an Asian university.

“With 20 years, we are in a very young age in our relations,” said Dusan Bella, the Slovak ambassador to Seoul, in an interview at his office in Yongsan District prior to Lajcak’s visit. “But from the point of view of bilateral achievements, we have quite mature relations, and we have very intensive cooperation, especially in the field of economics. Slovakia became a gateway for Korean business to the European Union.”

The two countries just released joint commemorative stamps to celebrate 20 years of bilateral ties, featuring images from Korean pansori - a traditional genre of music - and Slovakia’s “Lucnica” - a national folkloric ballet. Bella first proposed the venture in 2009, when he assumed his post in Seoul.

“For you, pansori is something very traditional. On our side, the Slovak folk dance is really dynamic, and Koreans like it .?.?. My intention was that our ties are so intensive and so important, that it is necessary to let people know about our very good and very productive relations in last 20 years.”

Bella said he most appreciates the beauty of the Korean countryside and has worked with the Korea Tourism Organization to offer suggestions on how provincial officers can entice foreigners to visit other parts of the country outside the capital region.

Bella also serves as the ambassador to North Korea, and concluded by reiterating Slovakia’s hope for the peninsula’s unification.

He recalled a trip he took earlier in November, when he visited Pyongyang’s Victorious Fatherland Liberation War Museum. “These kinds of things about victory I was told, it has nothing to do with reality. It’s not true.