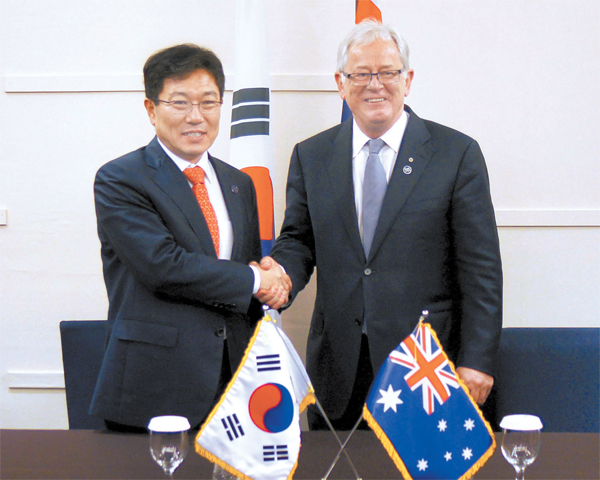 Korea and Australia reached a deal on a bilateral free trade agreement that asks Australia to immediately and completely remove its 5 percent tariff on Korean passenger cars, the country’s no. 1 export to Australia, Korea’s trade ministry said yesterday. The agreement was announced at a trade ministers’ meeting on Wednesday in Bali, Indonesia, between Korean Trade Minister Yoon Sang-jick and his counterpart from Australia, Andrew Robb.

Based on the deal, Korea will eliminate tariffs of up to 300 percent on Australia’s major exports, notably agricultural products such as wheat, dairy and beef.

Korea’s trade ministry said that it tried to minimize the FTA’s impact on local farmers by agreeing to cut tariffs on Australian beef over 15 years. Korea is the third-largest buyer of Australian beef.

The deal was reached after Korea and Australia had their seventh round of free trade talks in Bali.

At a briefing yesterday, Yoon said, “Australia has agreed to get rid of tariffs on almost all products within five years.”

The minister also said that when the Korea-Australia deal is finalized, Korea will be in a more beneficial position as it negotiates to participate in the Trans-Pacific Partnership.

The trade ministry announced in October that will resume negotiations with Canada, Australia and New Zealand in pushing forward with a free trade agreement.

So far, the negotiations have been slow because of other big deals that have involved the United States, the European Union. Korea is also working on a trilateral deal with China and Japan while also a separate deal with each of the two countries.

“The benefits of the free-trade agreement start flowing immediately and will be long-lasting,” said Australia’s Prime Minister Tony Abbott in an email statement. During the15 years to 2030, “exports to Korea will be 25 percent higher, resulting in the creation of more than 1,700 jobs,” he said.

Abbott, who said in his Liberal-National coalition’s Sept. 7 election victory speech that Australia was again “open for business,” is also aiming to secure agreements with nations including China, Japan, India and Indonesia within 12 months. Trade Minister Andrew Robb, selected by Abbott to complete the agreements, will hold talks in Singapore from Dec. 7 as government ministers meet in a bid to complete Trans-Pacific Partnership talks.

Two-way trade between Korea and Australia reached $29 billion last year, Abbott said. Negotiations for the agreement - which will remove tariffs on products such as beef, wheat, sugar, mineral resources, energy and manufactured goods - were concluded this week and will be signed following domestic approval processes, he said.

Tariffs on cars, Korea’s key export to Australia, are to be scrapped under the new arrangement, the north Asian nation’s trade ministry said in a separate statement. The agreement will be initiated in the first half of next year after legal checks, it said.