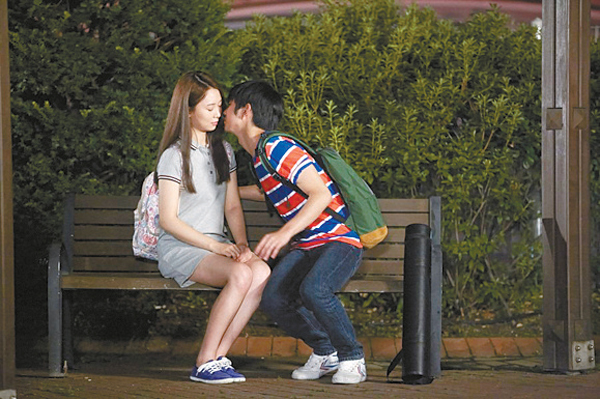 Songwriter Hee-soo (Kim Sun-young) runs into 19-year-old Seung-ho (Byun Jun-seok) in the elevator. She finds his nervous eyes inspiring. She seduces him and they eventually fall in love. But when Jun-ho, the love of Hee-soo’s life, returns, their love gets complicated.

The film claims to present an updated Korean version of the 1981 movie “Private Lessons.” But it hasn’t gotten as much attention as it claims. Although the main actress, Kim, was in the spotlight for her blue dragon tattoo on the red carpet of the Blue Dragon Awards, whether the film can get its own spotlight is doubtful.

Chang-su (Im Chang-jung) is about as low as you can go. The closest thing he has to a “job” is being a type of substitute prisoner, serving prison sentences for others in exchange for money. Other than that, he gambles and drinks.

All that changes, however, the day he meets Mi-yeon (Son Eun-seo). Chang-su falls in love and for the first time has something to live for. Unfortunately, Chang-su also has another prison sentence coming up that he has already agreed to take, serving time for the kind of person you do not cross - not without very bad things happening.

“Tumbleweed” is mostly a vehicle for actor and singer Im, showcasing his acting skills in a variety of melodramatic situations. It’s not exactly subtle, but Im has received some strong reactions by critics for his great acting.

But aside from Im’s performance, the story is rather artificial, and most of the characters are not well thought out. It’s a one-note movie, only recommended for the most die-hard fans of Im.

Oshin (Kokone Hamada), a little girl, was born and raised in a poverty-stricken home. When she turned 7, her father sent her to a wealthy family as a baby sitter and a live-in maid. Oshin adjusts to the endless chores, but because she had some money her grandmother gave to her, she was suspected of stealing. She runs away to get back home but encounters a snowstorm. A runaway soldier saves her, and they get to spend the whole winter together. After the winter, Oshin comes back home, but her father is unhappy and urges her daughter to find another house to work in.

The film is adapted from the Japanese TV drama of the same name in 1983, which was a massive hit. But since it is a remake, most of the people are already too familiar with the plot. The film focuses on Oshin’s childhood and because of that, half of the film is about how Oshin, a little girl, bravely soldiers on with her life. The story line might be too cliche, yet, the cuteness of the main actress Kokone Hamada will break the monotony and bring tears to viewers.

Ray Breslin (Sylvester Stallone) is a former lawyer and an expert on breaking out of prisons. Following his series of successes, the CIA offers him double the usual pay to make another breakout attempt. But the prison turns out to be a privately funded facility based on a book Breslin wrote about how prisons are incomplete. Breslin now has to figure out how to escape and who put him there with the help of his new cellmate Emil Rottmayer (Arnold Schwarzenegger).

The film can be put into few phrases: an older version of “Prison Break.” Contrary to expectations that the film might contain lots of action scenes, Stallone uses his brain much more. The pairing of the two veteran actors isn’t bad at all and the film meets general expectations for its setting. In fact, the setting is both the film’s strength and weakness, as the scenes are limited but also focused.

British drug dealer Frankie is in control of his life. He’s confident, connected and cunning - that is, until a good deal goes bad. Frankie’s world comes crashing down after a risky drug deal worth about $50,000 gets jeopardized and he’s left with nothing - no cash and no drugs. He loses his connections, and his world becomes a dangerous place, with crime bosses demanding their stash back and so-called friends turning their backs on him. Realizing he has no one to turn to, Frankie (Richard Coyle) becomes paranoid as he searches for a way out. Pulsing with violence and greed, the movie shows how far a human being can be pushed when faced with multiple dead ends and missteps. As an English-language remake of the 1996 Danish film, which became a worldwide hit, the movie mostly follows in the same vein of the original. Spanish-born director Luis Prieto calls it an “honor” to remake the film and said Nicolas Winding Refn, the original director, entrusted him to make the new version his own.

Tim was never really good at first impressions. His encounters with the ladies in particular are extremely awkward, and he never says the right things. That is, until he gets the chance at saying them right the first time. Tim (Domhnall Gleeson) learns from his father that the men in his family all have a special gift: They can travel back in time. At first, Tim thinks it’s crazy. After all, what’s crazier than going into a dark closet and wishing to go back in time? Except, in Tim’s case, it actually works. Tim gets to go back and rescue his buffoon-self from stuttered encounters and missed connections. What’s more is that he gets the opportunity to get it right with the love of his life, Mary (Rachel McAdams), whom Tim quickly falls in love with at a party. Yet when Tim travels back in time to help one of his friends, he discovers that he encounters a new set of consequences - such as losing Mary to another man. Each time Tim tries to balance his love for Mary and his penchant to take care of others around him, he faces new and grave obstacles and learns that there are some things time travel just can’t fix.

Directed by Richard Curtis, of “Four Weddings and a Funeral” (1994) and “Love Actually” (2003) fame, the film packs witty humor with touching moments between Tim and his father, played by the much-loved British actor Bill Nye.

Vin Diesel is back as his signature character, Richard Riddick, the toughest warrior in the whole universe. Rather than the space opera of “The Chronicles of Riddick” (2004), this movie returns to the character’s down-and-dirty roots, like we first saw in “Pitch Black” (2000). This time, Riddick is betrayed by a colleague and stranded on a deadly planet. With some giant storms and mud demons on their way, these dangers might even be too much for an injured Riddick. In a bid to survive, he lets himself be discovered by some bounty hunters, ordering them to leave him their spaceship or be killed. Director and writer David Twohy once again is at the helm, as in the first two Riddick movies. Twohy promises to further develop his deadly character and explore his psyche, but let’s face it, this is mostly an exercise in slick violence. But if that’s your thing, “Riddick” might be for you.