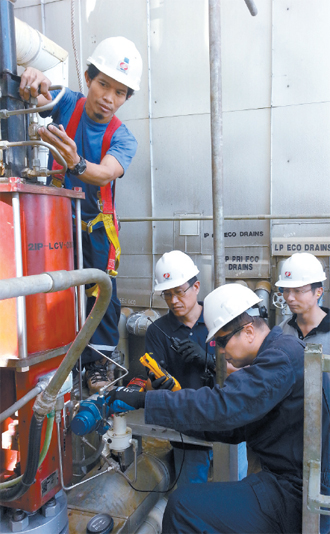 Philippine and Korean workers check equiptment at a combined-cycle power plant in Ilijan, Batangas City, built and operated by the Korea Electric Power Corporation. Provided by the company

The project was proposed by Hanjin Heavy Industries and Construction, which runs a shipyard in the Subic Special Economic and Freeport Zone, in a bid to obtain a consistent and reliable power supply for its business there.

The plant will also give other Korean companies stable access to an electricity source in the Philippines, which has suffered from multiple natural disasters in recent years.

The devastation brought by Typhoon Haiyan early last month only added to the shakiness of the power network in this Southeast Asian nation.

“I prayed and prayed that our power plant would be saved until the moment the typhoon veered away from the 1,200-megawatt generator,” said Hwang Hwa-yeon, a manager at the company’s Ilijan Combined-Cycle Power Plant, in Batangas, about 130 kilometers (80 miles) south of Manila. “I called my employees ‘ultra super,’ who made their best efforts to protect our facilities.

“When Kepco first decided to renovate an old power plant in Malaya in 1995, no one thought it was possible to build a stable plant in such a disaster-prone place,” he added. “But we’ve done it.”

Right now, Kepco and Hanjin Heavy Industries plan to build the new plant in the central region of Luzon, the Philippines’ biggest island and its political and economic center. The two companies hope to break ground within the year and are currently reviewing locations for the project, which has an estimated cost of more than 6.3 billion won ($600 million).

Several Philippine businesses are likely to join the project as stakeholders, according to Kepco.

Once the new power plant is completed, Kepco will negotiate power supply contracts individually with Korean companies operating in the Philippines, including Samsung Electronics, which has a semiconductor in the Clark Special Economic Zone. 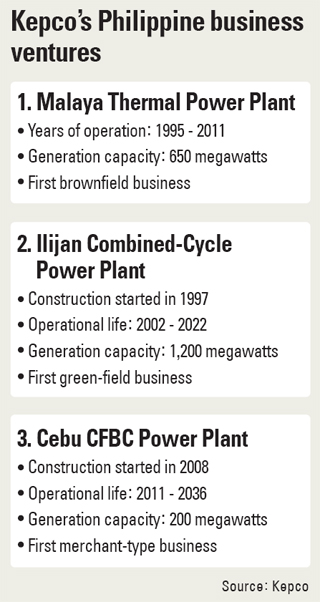 Kepco will attempt to operate the new power plant on a merchant-style contract, an independent type of business agreement in the Philippines that calls for the power producer to secure its own raw materials, recruit its own clients and set its own prices without government intervention.

By law, all private power generators in the Philippines must operate under the Wholesale Electricity Spot Market (WESM), a set of guidelines laying out the rules and procedures that govern the Philippine electricity market.

For each company or household, the unit price for power and transmission fees can vary.

In recent years, the Philippine government passed a series of power sector reforms, which handed over control of power generation and transmission to the National Grid Corporation of the Philippines, a private company, for the next 50 years.

When Kepco first came to the Philippines after winning an international bid to rehabilitate the Malaya Thermal Power Plant, the government supported the Korean company with fuel. Because the Ilijan Combined-Cycle Power Plant was also a government project, the Philippine government again provided free natural gas.

While it can be challenging for public utility companies like Kepco to survive in a privatized market, the company has appeared to adapt well to the competitive environment, producing high-quality power at lower costs and successfully operating its generators in safe and efficient manner.

“Amid rapidly changing market conditions, our goal is to be able to produce quality power at affordable prices, not only for Korean companies but also for local businesses and people,” said Hwang Kyu-byeng, the president of Kepco Philippines based in Manila. “Power plants built by Kepco are recognized as having the least problems and being the most effective here in the Philippines.”

Even at the risk of the recent Typhoon Haiyan, Kepco’s Ilijan power plant continued to operate. The average number of days that a private power plant is allowed to halt operations is 10.9 days, a mandate set by the Philippine government.

Kepco’s Ilijan plant stopped an average of 0.7 days in 2009 and 1.1 days last year, a testament to its efficiency over other power suppliers.

The Korean company invested $721 million into the combined gas-fired power plant and holds a 51 percent stake. On a build-own-transfer contract, Kepco will run the plant for 23 years and then transfer it to a new owner.

It currently accounts for 10 percent (1,400 megawatts) of the Philippines’ total power production. According to company records, it is the fourth-largest independent power producer in the Southeast Asian nation. It is also the 114th largest by sales, 11th by net profit and 14th by corporate tax payment.