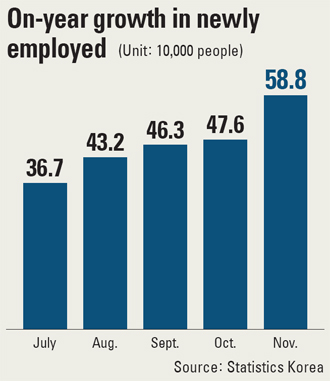 According to Statistics Korea yesterday, the number of newly employed hit 588,000 in November, the largest year-on-year growth since September 2012 and a good sign for the nation’s labor market.

Last month’s growth was led by increased employment in the service and manufacturing sectors.

The number of new jobs in the service industry rose by 598,000, leading overall growth.

About 35,000 jobs were added in the manufacturing sector.

While employment of Koreans who are in their 50s fell slightly compared to the previous month, the number of people in their 40s and 60s, who found new jobs, climbed month-on-month.

The improvement in the job market for struggling twentysomethings was remarkable. The number of employed people aged 15 to 29 climbed by 54,000 last month, compared with the same month last year. The figure had dropped by 60,000 in August, following a 102,000 decline in July.

The Ministry of Strategy and Finance said a combination of base effect from last year and recent economic recovery trends positively affected the job market.

“The job market in the second half of last year was not good due to uncertainties from the eurozone crisis, so there has been a base effect,” a ministry official said. “However, the service sector contributed to the overall growth, marking the largest increase since March 2002.”

The official said the third straight rise in youth employment was also a good sign. It was the biggest since September 2004.