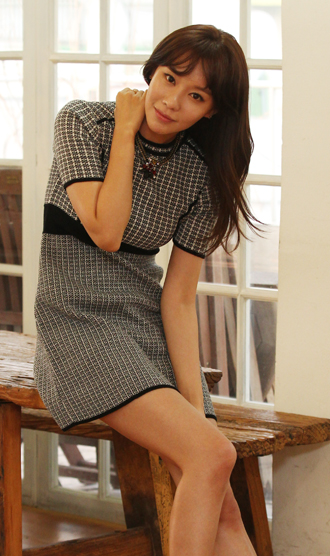 Actress Kim A-joong, the star of last year’s “My PS Partner” and the 2006 film “200 Pound Beauty,” is returning to the big screen in the romantic comedy “Catch Me” next week. In the movie set to be released on Thursday, Kim plays the role of Yun Jin-suk, a professional thief who not only steals luxury items but also the hearts of many men.

Her counterpart is played by actor Joo Won, who has become more popular after taking part in the KBS drama “Good Doctor,” in which he played an autistic medical resident. In the film he plays a policeman named Lee Ho-tae who dated the notorious thief about a decade ago.

Q. Why did you do another romantic comedy after “My PS Partner”?

A. I think “Catch Me” is more toward comedy. There are many scenes that young children can appreciate. The director has focused on those and has tried to minimize the number of smoking scenes or ones with too many curses.

Considering that it was your first time playing a thief, have you had any personal experiences that helped you understand the character better?

I think almost everyone has taken a coin from a parent’s wallet when they were young. Also, I paid 200 won for a snack when I was really young and then asked for 300 won worth of snacks from the street shops. I have watched scenes from “White Collar,” the TV drama made in the United States, to see what criminals would wear and how they would unlock a safe.

Have you met your ex-boyfriends again?

I have never encountered my previous boyfriends accidentally. But I have met one in an arranged setting. He was someone I could run into anytime because we were working in related industries. They don’t seem to change much because they don’t have me anymore.

How was it working with Joo Won?

We started filming before “Good Doctor,” which Joo was in, had ended. I was surprised to see the skyrocketing popularity he garnered during the filming. I was so thankful that he didn’t give a hint of his fatigue, although it must have been really tough for him. Sometimes we were thankful for him to just stay in front of the camera.

Is it true that you were more skilled in filming the kissing scene than Joo?

That is true. I think I have passed the phase when I get embarrassed and my cheeks turn red while filming a kissing scene. Joo said he has done many pecks on the lips, but not a real kiss.

I have never dated anyone younger. I think I’m a better fit with someone more masculine, rather than someone cute.