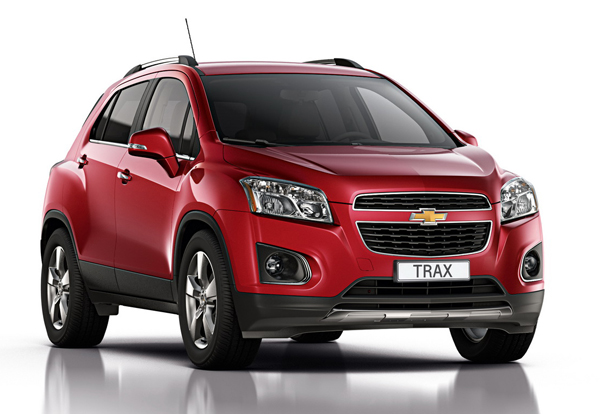 The Chevrolet Trax, a compact sport utility vehicle made by GM Korea, was chosen as the safest car of the year by the Ministry of Land, Infrastructure and Transport.

The Trax, which was released in Korea in February, received the top rating with an overall score of 93.5 points, followed by Kia Motors’ Carens (90.3) and Hyundai Motor’s Maxcruz (88.1).

Despite strong grades in crash and driving safety, the Volkswagen Tiguan was the only car given a Class 3 rating due to a failing grade in pedestrian safety.

The Class 1 rating is given to models that score more than 83 points, while cars that scored between 80.1 and 83 points are graded as Class 2.

The ministry said that compared to data from 2009, the possibility of severe injury in a car crash has decreased significantly. 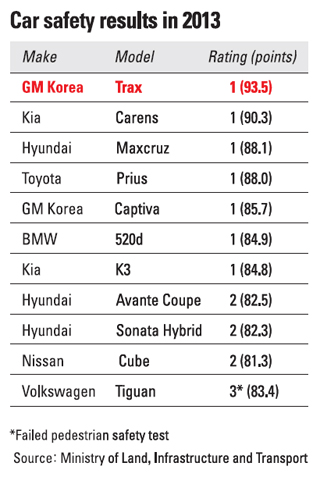 The Trax was the best car in the crash test with 101.1 points, followed by Hyundai’s Maxcruz (99.2) and the Sonata Hybrid (98.8). For the first time, the ministry added a safety test designed for female passengers, and six models (Avante Coupe, K3, Carens, Cube and Tiguan) showed results that indicated women were 10 percent more likely to be injured than men. The test evaluated neck impact.

In pedestrian protection tests, the Trax also topped the category with 75.7 points followed by Toyota Prius (73.6) and Kia Carens (68.3).

The ministry said that the average satisfaction level of pedestrian safety grades doubled from 28.7 percent in 2008 to 56.9 percent in this year, but automakers still need to work harder to improve in the area.

In the driving safety area, which measures rolling and braking, the BMW 520d was No. 1 with 95 points, while Kia K3 and the VW Tiguan sharing second with 90 points.

In terms of accident prevention, all 11 models were evaluated as poor, and the ministry urged the automakers to install better accident-prevention equipment. The ministry gives additional points to cars that are equipped with forward-collision warning detectors, a lane-departure warning system and a warning call system for not wearing seat belts.

Of the 11 models, only the BMW 520d and Volkswagen Tiguan were given an extra 0.3 points for a seat-belt warning system. The Toyota Prius had the equipment installed for driver and passenger, but its warning alarm failed to last for 90 seconds.

BMW’s popular midsize t 520d sedan was the only model that had all three warning systems, but its frontal-collision and lane-departure warning failed to meet requirements for getting additional points.

For a frontal-collision warning, the ministry requires an alarm at least 2.1 seconds prior to a collision, but the t 520d’s time to collision was around 1.3 seconds to 1.5 seconds in five tests.

“We are planning to adopt consumers’ requests into our car safety evaluation in the future,” said Kwon Sok-chang, who heads the automobile policy planning unit at the Transport Ministry. “Fuel efficiency, high-tech safety equipment, and protection of older people and the disabled also should be evaluated.”

The ministry said the award ceremony for the safest car of year will be held today at COEX in southern Seoul, while a seminar for automakers, scholars and government officials to discuss the automobile safety evaluation system also will be held.